Port Royale 4 headed to consoles and PC in late 2020 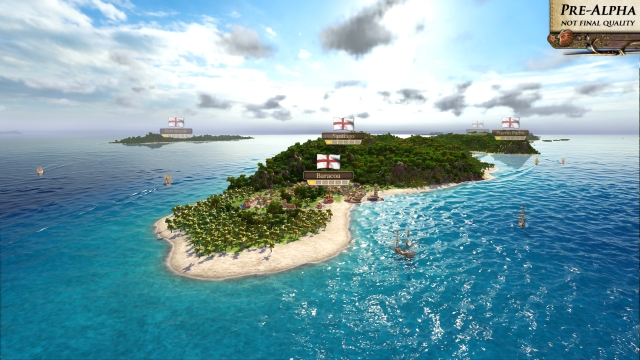 You'll be able to put your seafaring trade skills to work on Switch, PS4, Xbox One and PC.

The Port Royale franchise is set to continue, with word coming last night that a fourth installment is currently in development for Switch, PlayStation 4, Xbox One and PC. The title is due to arrive in the third quarter of 2020, according to a press release.

Currently in the works over at Gaming Minds Studios, the group responsible for the likes of Patrician and Railway Empire, Port Royale 4 is being funded in part by 'Film und Medienstiftung NRW.' A note on that group's official site indicates it "supports films for cinema and television at all stages of production and distribution as well as the development of innovative audiovisual content."

In Port Royale 4, players serve as governor to a small colony, hoping to turn a collection of a few buildings and boats into a "bustling trader city." That task requires production chains, complex trade routes that span the Caribbean and capable service to a viceroy who will reward those efforts with new buildings and vessels.

"Along the way, conquer the cities of rival nations and hunt down their fleets while keeping a keen eye out for pirates and other privateers," recommends the press release. "For the first time in the series, naval battles will be turn-based, with up to ten ships battling at a time and special tactical captain maneuvers that can turn the tide of battle."

There's not a whole lot more to go on at this time, beyond alpha screenshots and the teaser trailer embedded above, but 2012's Port Royale 3 seems to have been a reasonably big deal and eventually expanded beyond PC to reach Xbox 360 and PlayStation 3. The next installment in that series could very well be worth your attention, if it falls within your wheelhouse.

If you enjoyed this Port Royale 4 article, you're encouraged to discuss it with the author and with other members of the site's community. If you don't already have an HonestGamers account, you can sign up for one in a snap. Thank you for reading!

© 1998-2021 HonestGamers
None of the material contained within this site may be reproduced in any conceivable fashion without permission from the author(s) of said material. This site is not sponsored or endorsed by Nintendo, Sega, Sony, Microsoft, or any other such party. Port Royale 4 is a registered trademark of its copyright holder. This site makes no claim to Port Royale 4, its characters, screenshots, artwork, music, or any intellectual property contained within. Opinions expressed on this site do not necessarily represent the opinion of site staff or sponsors. Staff and freelance reviews are typically written based on time spent with a retail review copy or review key for the game that is provided by its publisher.