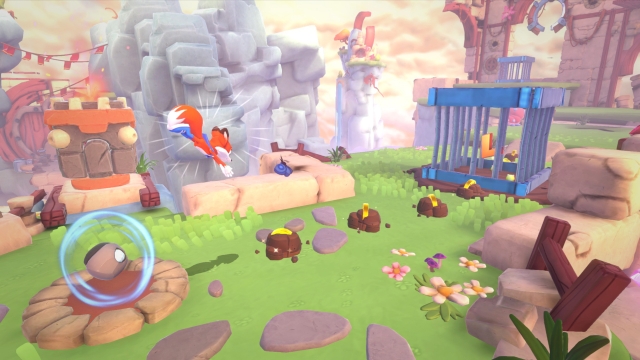 The 3D platformer was last seen on Steam and Xbox One.

Playful Studios is hard at work on New Super Lucky's Tale, a "total reimagining" of the 3D platformer of a similar name. It is due to arrive on Nintendo Switch later this year as a digital download.

"We always planned to bring Lucky to Nintendo Switch  it's a fantastic console and the perfect fit for Lucky's adventures," said Paul Bettner, founder and CEO of Playful Studios. "But we realized we had a great opportunity to improve on everything that has come before. Led by feedback from our passionate community, New Super Lucky's Tale is a platforming adventure that measures up to the most beloved games of the genre and the best way to experience Lucky's story yet."

Microsoft published the game when it appeared on Xbox One, so perhaps the hyperbole has some basis? The game stars a fox who is drawn into the Book of Ages and must defeat a villain named Jinx in order to return home. Along the way, he'll meet friends and adversaries, including "the Kitty Litter."

As per the developer, features players should expect in this newer take on the adventure include:

The game is on display at this year's E3, so maybe check it out if you're fortunate enough to be in attendance. You can also check out the announcement trailer, embedded above, if you would like to see Lucky in action.

If you enjoyed this New Super Lucky's Tale article, you're encouraged to discuss it with the author and with other members of the site's community. If you don't already have an HonestGamers account, you can sign up for one in a snap. Thank you for reading!

© 1998-2021 HonestGamers
None of the material contained within this site may be reproduced in any conceivable fashion without permission from the author(s) of said material. This site is not sponsored or endorsed by Nintendo, Sega, Sony, Microsoft, or any other such party. New Super Lucky's Tale is a registered trademark of its copyright holder. This site makes no claim to New Super Lucky's Tale, its characters, screenshots, artwork, music, or any intellectual property contained within. Opinions expressed on this site do not necessarily represent the opinion of site staff or sponsors. Staff and freelance reviews are typically written based on time spent with a retail review copy or review key for the game that is provided by its publisher.