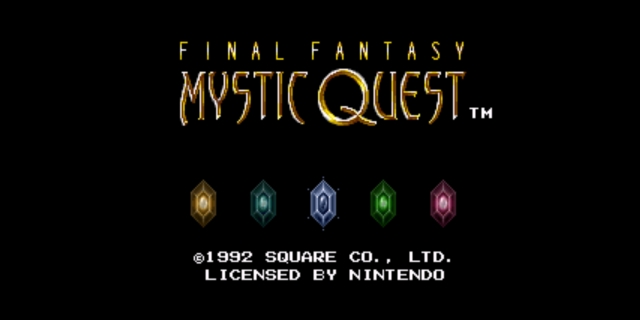 Some people will tell you the music was always the best part of the game. They might not be wrong.

Retro games may be old news, but their music touched an entire generation. Now that generation is old enough to spend money buying digital soundtracks, or to take classic compositions and give them new life with modern arrangements and technology that lets old songs breathe new life.

Today, arranger Sean Schafianski released Final Fantasy Mystic Quest Remastered Soundtrack, which is a loving tribute to rock and fantasy tunes composed by Ryuji Sasai and Yasuhiro Kawakami for Final Fantasy: Mystic Quest on the 16-bit Super Nintendo. It's not a game a lot of people remember fondly, but for one element: its awesome tunes.

"The soundtrack to Final Fantasy: Mystic Quest is a cult classic," said Schafianski. "The blend of rock, jazz, and delightfully cheesy synths was probably the best part of the game!"

Schafianski is putting together a whole series of "Remastered Tracks," and you'll find more information about it right here. He has worked to bring music from a variety of retro RPGs to life over the last few years, including Final Fantasy VI, Brigandine and Secret of Evermore.

Certainly, Schafianski has the skills and knowledge necessary to do the classic compositions justice. He has a degree in composition from Grand Valley State University, and apparently likes playing the saxophone. Lisa Simpson would surely find him a kindred spirit.

You can find and potentially purchase the Final Fantasy Mystic Quest Remastered album for yourself on iTunes, if you're so inclined. Individual songs are $0.99, or you can get the whole lot of them for the standard $9.99. It also is available on Spotify and Bandcamp.

If you're into retro music with a modern touch, maybe it's time to buy a little music?

If you enjoyed this Final Fantasy: Mystic Quest article, you're encouraged to discuss it with the author and with other members of the site's community. If you don't already have an HonestGamers account, you can sign up for one in a snap. Thank you for reading!

© 1998-2021 HonestGamers
None of the material contained within this site may be reproduced in any conceivable fashion without permission from the author(s) of said material. This site is not sponsored or endorsed by Nintendo, Sega, Sony, Microsoft, or any other such party. Final Fantasy: Mystic Quest is a registered trademark of its copyright holder. This site makes no claim to Final Fantasy: Mystic Quest, its characters, screenshots, artwork, music, or any intellectual property contained within. Opinions expressed on this site do not necessarily represent the opinion of site staff or sponsors. Staff and freelance reviews are typically written based on time spent with a retail review copy or review key for the game that is provided by its publisher.