Katamari Damacy REROLL will arrive this year on Switch and PC 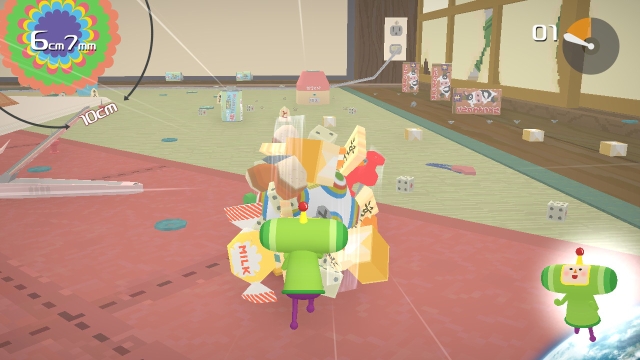 When the King of the Cosmos goes on a bender, a good video game is the result.

When Katamari Damacy first arrived on PlayStation 2 around 14 years ago, I didn't immediately think much of it. But the game has evoked a warm feeling ever since when I see it mentioned, and so I am pleased that Bandai Namco yesterday announced it will bring a remastered version of the classic to Switch and PC.

Katamari Damacy REROLL, as it is being called, is a remaster of the original title. As such, the gameplay looks like it will remain largely the same, but with different control options to suit a 2018 audience.

If you play Katamari Damacy REROLL on Nintendo Switch, you'll be able to utilize motion controls optimized for the platform. The left and right Joy-Con controllers let you move the hero simply by turning your wrists instead of using the analog sticks. That is, they do if you're playing in tabletop or TV mode. Otherwise, you might twist your hardware until it snaps.

For those who aren't aware, Katamari Damacy on PlayStation 2 and now on Switch and PC stars the son of the King of All Cosmos. The lad's father had a rambunctious night of fun and accidentally knocked the stars out of the sky, so it's your job to gather a bunch of garbage that you can launch into space to replace the burning balls of gas that existed previously.

"Katamari Damacy is a game of pure joy. From the whimsical story, colorful graphics, cute characters, and delightful J-pop soundtrack, the game simply exudes light-hearted fun," said Abelina Villegas, who works as Associate Brand Manager at Bandai Namco Entertainment America. "We aim to delight returning fans of the franchise as well as those who may not have had a chance to be on the ball the first time around with Katamari Damacy REROLL."

The Katamari series inspired a few sequels, starting with We Love Katamari (also on PlayStation 2) and branching out from there to Xbox 360, PlayStation 3, Vita and other devices. If REROLL is a success, maybe some of the others will also follow. Would you like that?

If you enjoyed this Katamari Damacy REROLL article, you're encouraged to discuss it with the author and with other members of the site's community. If you don't already have an HonestGamers account, you can sign up for one in a snap. Thank you for reading!

© 1998-2021 HonestGamers
None of the material contained within this site may be reproduced in any conceivable fashion without permission from the author(s) of said material. This site is not sponsored or endorsed by Nintendo, Sega, Sony, Microsoft, or any other such party. Katamari Damacy REROLL is a registered trademark of its copyright holder. This site makes no claim to Katamari Damacy REROLL, its characters, screenshots, artwork, music, or any intellectual property contained within. Opinions expressed on this site do not necessarily represent the opinion of site staff or sponsors. Staff and freelance reviews are typically written based on time spent with a retail review copy or review key for the game that is provided by its publisher.