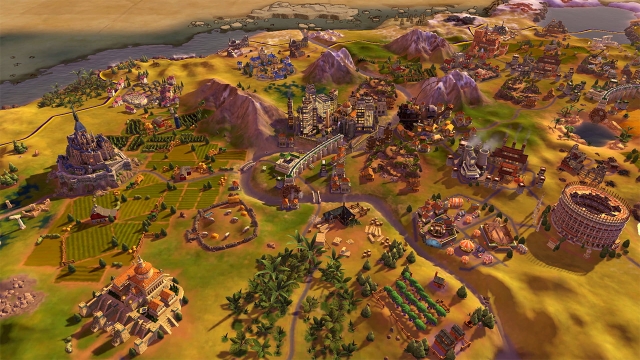 Look, ma! It's another third-party game of the sort Wii U led us to believe could never come to a Nintendo console.

Strategy games may not have a long, rich history on Nintendo platforms, but every now and then, some publisher tries to bring a PC hit to Mario's house to keep him company. Yesterday, 2K announced it will make such an attempt, with Sid Meier's Civilization VI.

Originally developed by Firaxis Games and heaped with all sorts of genre and industry awards, Civilization VI is due to arrive on Nintendo Switch on November 16, 2018. The port is being handled by Aspyr Media, rather than Firaxis (which, let's be honest, is probably already hard at work on the sequel).

In the Civilization titles, your goal is to "build an empire to stand the test of time." You do this by exploring, researching technology, battling and defeating enemies, threatening world leaders and in general having a strategic good time.

Key features you should look forward to include the option to play as one of 24 different leaders, to watch your sprawling empire fill up a vibrant map and to challenge four playable scenarios.

In "Outback Tycoon," you'll be part of the colonization of Australia. In "Jadwiga's Legacy," you're trying to repel invaders who have their sights set on Poland. As a Viking leader, you'll plunder Europe in "Vikings, Raiders, and Traders!" And finally, you can attempt to conquer the known world in "Conquests of Alexander."

Cooperative and competitive multiplayer modes are available, as well, so that as many as four players can battle for supremacy (or just good vibes?) using a wireless LAN. Just remember that if you betray your friends, they could come back at you with rockets and vengeance in their eyes. Assuming they survive your duplicitous behavior.

I just checked a few retail sites online to see if the game is listed for sale yet, but it is not. However, a physical edition does seem to be on its way, so you'll have your choice of how to add the game to your collection. Me, I'm most inclined to get a cartridge... which by now should surprise no one.

If you enjoyed this Sid Meier's Civilization VI article, you're encouraged to discuss it with the author and with other members of the site's community. If you don't already have an HonestGamers account, you can sign up for one in a snap. Thank you for reading!

© 1998-2021 HonestGamers
None of the material contained within this site may be reproduced in any conceivable fashion without permission from the author(s) of said material. This site is not sponsored or endorsed by Nintendo, Sega, Sony, Microsoft, or any other such party. Sid Meier's Civilization VI is a registered trademark of its copyright holder. This site makes no claim to Sid Meier's Civilization VI, its characters, screenshots, artwork, music, or any intellectual property contained within. Opinions expressed on this site do not necessarily represent the opinion of site staff or sponsors. Staff and freelance reviews are typically written based on time spent with a retail review copy or review key for the game that is provided by its publisher.