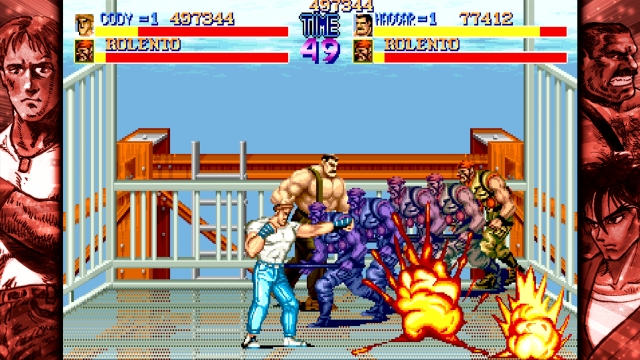 Due to arrive on September 18, 2018, Capcom Beat 'Em Up Bundle will be available for Nintendo Switch, PlayStation 4, Xbox One and Steam. You'll find a trailer embedded immediately below.

As noted, the compilation includes seven arcade classics. It's a fair representation of Capcom's contribution to the genre, but doesn't include licensed fare you might also have hoped to see in the lineup. Here's the official list:


The last two on that list are the home platform newcomers. The others were all available on various systems, and particularly the SNES. Good luck finding some of those for a decent price on eBay, though.

Capcom Beat 'Em Up Bundle includes not only the games, but the sort of reverential treatment Capcom recently enjoys showering on its older hits. You'll find "comprehensive" galleries featuring "stunning art, design sketches, development documents, archives of the original game sleeves and instruction cards, as well as special artwork that was only available to fan-club members at the time."

Capcom also indicates the games will support co-operative play, both locally and online, with drop-in mode offered so you can holler for help when you need it. For fans of the classic games included, this seems like a nice package that will keep them accessible for years to come. Are you in the mood for a fight?

If you enjoyed this Capcom Beat 'Em Up Bundle article, you're encouraged to discuss it with the author and with other members of the site's community. If you don't already have an HonestGamers account, you can sign up for one in a snap. Thank you for reading!

© 1998-2021 HonestGamers
None of the material contained within this site may be reproduced in any conceivable fashion without permission from the author(s) of said material. This site is not sponsored or endorsed by Nintendo, Sega, Sony, Microsoft, or any other such party. Capcom Beat 'Em Up Bundle is a registered trademark of its copyright holder. This site makes no claim to Capcom Beat 'Em Up Bundle, its characters, screenshots, artwork, music, or any intellectual property contained within. Opinions expressed on this site do not necessarily represent the opinion of site staff or sponsors. Staff and freelance reviews are typically written based on time spent with a retail review copy or review key for the game that is provided by its publisher.