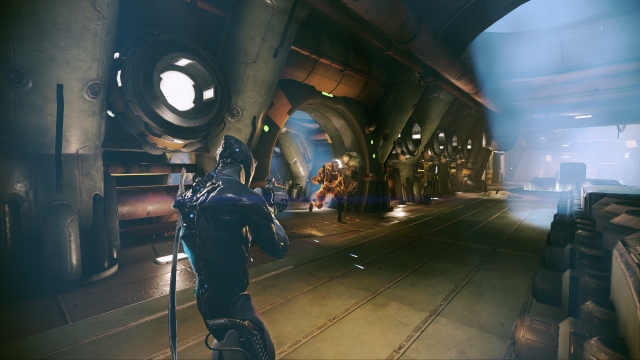 Digital Extremes announced today that Warframe, its third-person shooter, is due to arrive on Nintendo Switch on November 20, 2018. That's a Tuesday.

Warframe has amassed 38 million registered users, and has been in a "five-year growth cycle" on multiple systems including PC, PlayStation 4 and Xbox One. If my inbox is any indication, the game is either a very big deal or is represented by tireless PR people. It's also free-to-play.

The Switch port is being handled by Panic Button, a studio that is quickly earning a name for itself following its work on DOOM, Wolfenstein: The New Colosssus and Rocket League ports to the same hardware.

For those who haven't played Warframe, a group that includes yours truly, Digital Extreme has promised "an unparalleled blend of fast, fluid combat, deep RPG and customization systems, and a constantly evolving stream of updates, all couched in an imaginative science fiction setting." That sounds pretty good, actually.

Players assume the role of ancient warriors known as Tenno and wield blades and guns as they work in service to the Lotus, a guide that directs them so they can restore order throughout the Solar System. Equipped with the Warframe armor, they can dash up walls, Bullet Jump across vast terrain and Dive-Kick into "a teeming crowd of Grineer" (which from context I interpret to be their sworn enemies).

Warframe features 36 different Warframes at last count, plus weapons and gear and such to keep players busy for hours at a time. I can only assume there are also numerous options to spend real-world money and advance your digital career, or else it wouldn't make much sense to keep developing what sounds like a sprawling, expensive project.

Interested in learning more about Warframe? You can get additional details at the official site, and by watching the video embedded above. Then, if you're so inclined, you can mark your calendar for November 20. Those countless bad guys are hardly likely to kill themselves!

If you enjoyed this Warframe article, you're encouraged to discuss it with the author and with other members of the site's community. If you don't already have an HonestGamers account, you can sign up for one in a snap. Thank you for reading!

© 1998-2021 HonestGamers
None of the material contained within this site may be reproduced in any conceivable fashion without permission from the author(s) of said material. This site is not sponsored or endorsed by Nintendo, Sega, Sony, Microsoft, or any other such party. Warframe is a registered trademark of its copyright holder. This site makes no claim to Warframe, its characters, screenshots, artwork, music, or any intellectual property contained within. Opinions expressed on this site do not necessarily represent the opinion of site staff or sponsors. Staff and freelance reviews are typically written based on time spent with a retail review copy or review key for the game that is provided by its publisher.