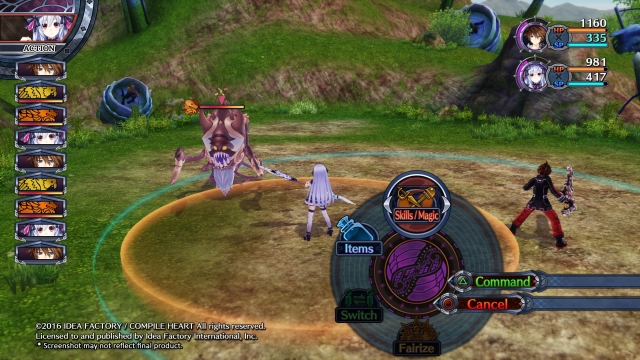 It currently appears to be planned exclusively as a digital title, but hey, it's a start!

Idea Factory announced today that it is bringing Fairy Fencer F: Advent Dark Force to Nintendo Switch later this year. The game will arrive on the Nintendo eShop in "Fall 2018."

Fairy Fencer F: Advent Dark Force is the enhanced version of Fairy Fencer F, which arrived on North American PlayStation 3 systems in September of 2014. It was developed by Compile Heart, the team behind the Hyperdimension Neptunia franchise, which is why the screenshot above looks almost like it could have been lifted out of one of those other games.

In the game, players are introduced to a world filled with power-imbued weapons called Furies. Powerful heroes known as Fencers manage those weapons and do heroic (and not-so-heroic) things.

Fairy Fencer F: Advent Dark Force was released on PlayStation 4 in July of 2016 (and on PC in February of the next year), and Idea Factory subsequently released 25 bits of DLC. Those are included in the upcoming release, which depending on your view could make for quite the bargain.

You'll be able to add Fairy Fencer F: Advent Dark Force to your Nintendo Switch library for $39.99 USD, and it will be available in Europe from Ghostlight around the same time (I presume). The apparent lack of a physical edition is definitely disappointing, but perhaps understandable given the game's age. Of course, knowing my luck, I'll break down and buy the digital edition and someone will swoop in to announce a physical one three days later...

If you enjoyed this Fairy Fencer F: Advent Dark Force article, you're encouraged to discuss it with the author and with other members of the site's community. If you don't already have an HonestGamers account, you can sign up for one in a snap. Thank you for reading!

© 1998-2021 HonestGamers
None of the material contained within this site may be reproduced in any conceivable fashion without permission from the author(s) of said material. This site is not sponsored or endorsed by Nintendo, Sega, Sony, Microsoft, or any other such party. Fairy Fencer F: Advent Dark Force is a registered trademark of its copyright holder. This site makes no claim to Fairy Fencer F: Advent Dark Force, its characters, screenshots, artwork, music, or any intellectual property contained within. Opinions expressed on this site do not necessarily represent the opinion of site staff or sponsors. Staff and freelance reviews are typically written based on time spent with a retail review copy or review key for the game that is provided by its publisher.