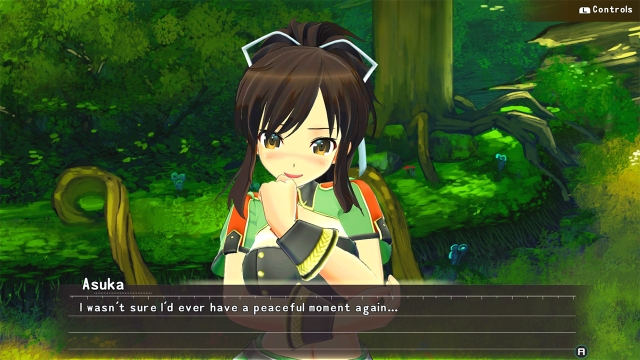 That's a clever title for this article, you understand, because it sort of incorporates the game developer's name.

Senran Kagura Reflexions, which was available to pre-order starting a few weeks ago, is now available to buy without the unpleasant wait, publisher XSEED Games announced today in a press release issued mere hours before the avalanche of Nintendo news unleashed by today's Nintendo Direct.

XSEED calls the game a "casual friendship-building experience," and the reason you might care to play it is that Reflexions features a few of the leading ladies from the main Senran Kagura series. Except now, instead of kicking butt or shooting one another with water pistols, they're doing more relaxing things while you interact with them in various M-rated ways.

"Senran Kagura Reflexions uses the unique properties of the Joy-Con to employ the art of reflexology and massage," notes today's press release. "Melt away Asuka's worries and stresses by hand or through a variety of useful tools, and explore deeper relationships than have ever been possible in the series before."

Asuka is the star of the show, for now, and players will have to judge the success of their actions by the reactions they see on-screen. This can lead to seven different "situations" and six different endings, but that's not the end of the story. In coming weeks, new characters will be added as DLC: Yumi, Murasaki, Ryōna and Yomi.

Senran Kagura Reflexions is developed by Honey Parade Games, which is otherwise best known for not much of anything else just yet. This was the studio's first effort, and so far the response from critics is that it doesn't do much to justify even its rather low price of $9.99 USD on the eShop. Check out the trailer embedded above to see if it might be up your alley anyway...

If you enjoyed this Senran Kagura Reflexions article, you're encouraged to discuss it with the author and with other members of the site's community. If you don't already have an HonestGamers account, you can sign up for one in a snap. Thank you for reading!

© 1998-2021 HonestGamers
None of the material contained within this site may be reproduced in any conceivable fashion without permission from the author(s) of said material. This site is not sponsored or endorsed by Nintendo, Sega, Sony, Microsoft, or any other such party. Senran Kagura Reflexions is a registered trademark of its copyright holder. This site makes no claim to Senran Kagura Reflexions, its characters, screenshots, artwork, music, or any intellectual property contained within. Opinions expressed on this site do not necessarily represent the opinion of site staff or sponsors. Staff and freelance reviews are typically written based on time spent with a retail review copy or review key for the game that is provided by its publisher.