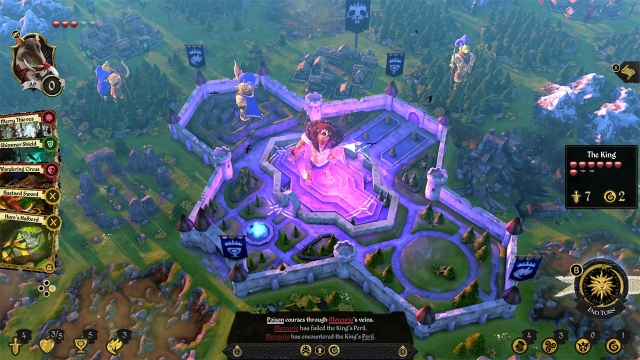 The animal-themed board game will bring its brand of mayhem to Switch shortly before October's arrival.

League of Geeks announced today that Armello is coming to Nintendo Switch. The game will be available in two editions, starting September 27, 2018.

Armello without any subtitles will have an MSRP of $19.99 USD, while Armello: Complete Edition carries an MSRP of $39.99 USD. Both are supposedly available to pre-order today on the Nintendo eShop, but I searched and could only find the vanilla edition.

In a mock board game format, Armello introduces players to five clans: Bear, Rabbit, Rat, Wolf and Bandit. It's up to you, as one of those players, to take the crown from the crazed lion king (no relation) and bring peace to the realm. Along the way, you'll also deal with the corrupting force of "the Rot."

If you can find and purchase the "complete" version of the game, you'll receive eight additional playable characters from the "Usurpers" and "Rivals" hero packs (on top of what seems to be a base roster of 20), two alternative board skins from the "Seasons" pack, additional hero skins, and the premium dice pack. But it sounds like even if you're ready to spend only the $19.99 USD, you'll get a lot of content and can probably add to it later if you become totally absorbed.

"For over three years now, Armello has taken the experience of playing board games with a table full of friends and brought that to life in a virtual space," said Trent Kusters, co-founder and director, League of Geeks. "Not only does Armello play brilliantly on the Switch, whether docked or on the go, but players new and old will inherit years of content, updates, and improvements when Armello launches on Nintendo Switch."

Armello has earned itself all sorts of recognition, and is already available on a host of platforms including PC, PlayStation 4, Xbox One, iOS and Android. With a Redwall-ish vibe and what looks like interesting gameplay, it looks like it could be a terrific edition to your Switch library. Me, I'll probably wind up buying it at some point and then completely ignoring it, as I have unfortunately done with the PC version I already got from Humble Bundle some time ago. Alas!

If you enjoyed this Armello article, you're encouraged to discuss it with the author and with other members of the site's community. If you don't already have an HonestGamers account, you can sign up for one in a snap. Thank you for reading!

© 1998-2021 HonestGamers
None of the material contained within this site may be reproduced in any conceivable fashion without permission from the author(s) of said material. This site is not sponsored or endorsed by Nintendo, Sega, Sony, Microsoft, or any other such party. Armello is a registered trademark of its copyright holder. This site makes no claim to Armello, its characters, screenshots, artwork, music, or any intellectual property contained within. Opinions expressed on this site do not necessarily represent the opinion of site staff or sponsors. Staff and freelance reviews are typically written based on time spent with a retail review copy or review key for the game that is provided by its publisher.