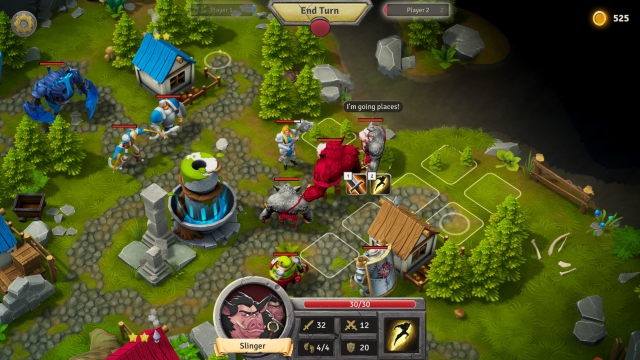 As the Switch release of Exorder approaches, Fat Dog Games has announced a price drop for the Steam edition.

Exorder is a turn-based strategy game from Solid9 that is headed to Nintendo Switch on September 27, 2018. It will cost $12.99 USD when it arrives, and the Steam version will drop $2 from its current price ($14.99) to match it.

In Exorder, you play as the heroic Princess Beyla, who takes a personal interest in protecting the people of her kingdom. There are "more than 10 battle units" (so... 11?) to choose from, each with "distinct" and "quirky" skills.

From the sound of things, the game offers only a brief single-player campaign where you defend the kingdom of Cerulean from a malicious prince named Tristan. Once you learn the ropes, you can head online and participate in battles with as many as three other players, or even compete more locally if you can gather a few like-minded chums for some friendly competition. Crossplay is also supported, which is increasingly common but still nice to see.

One nice thing about Exorder is that it adopts a brighter and more cheerful aesthetic, with a sense of humor, and yet it sounds like it will offer depth for players who stick with it long enough to master its intricacies.

"This is a love song to the classic games in the turn-based tactics genre," explained Darek Skrzypkowski, CEO at Fat Dog Games. "Exorder is a brilliant and welcoming tribute to that scene with its vibrant colors, quirky humor and intuitive mechanics made even better when played with friends."

Exorder features English language support, with Polish subtitles available. That might seem like an odd choice for language, but keep in mind the game's publisher is based in Poland and it makes a bit more sense. It's also good news, of course, if you happen to live in that region.

If you enjoyed this Exorder article, you're encouraged to discuss it with the author and with other members of the site's community. If you don't already have an HonestGamers account, you can sign up for one in a snap. Thank you for reading!

© 1998-2021 HonestGamers
None of the material contained within this site may be reproduced in any conceivable fashion without permission from the author(s) of said material. This site is not sponsored or endorsed by Nintendo, Sega, Sony, Microsoft, or any other such party. Exorder is a registered trademark of its copyright holder. This site makes no claim to Exorder, its characters, screenshots, artwork, music, or any intellectual property contained within. Opinions expressed on this site do not necessarily represent the opinion of site staff or sponsors. Staff and freelance reviews are typically written based on time spent with a retail review copy or review key for the game that is provided by its publisher.