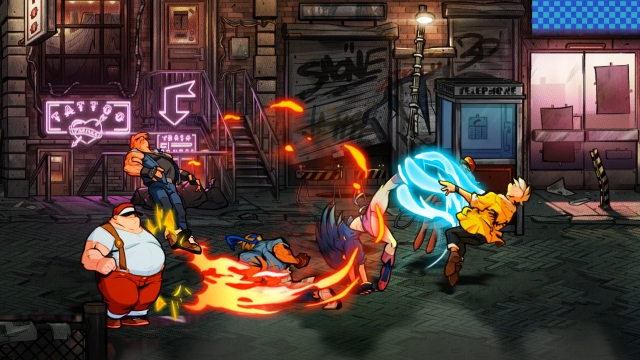 The streets are starting to get seriously pissed off as of late...

SEGA today announced-- no, wait. That's not right. Dotemu today announced Streets of Rage 4, a brand new entry in the beloved brawler series that is currently in development by Lizardcube (best known for its remake of Wonder Boy: The Dragon's Trap) and Guard Crush Games.

Dotemu has been on a retro kick lately, publishing not only the aforementioned Wonder Boy remake, but new entries in the Windjammers franchise. A new installment in the long-neglected Strets of Rage series is a fairly serious move, especially as SEGA still holds the rights to the first three games and presumably the franchise as a whole.

"Streets of Rage 4 builds upon the classic trilogy's gameplay with new mechanics, a fresh story and a gauntlet of dangerous stages with a serious crime problem," reads today's press release. "Streets of Rage 4 recalls classic gameplay but it stands as an entirely original arcade-style romp thanks to the expertise of Guard Crush Games and Dotemu."

From the look of things, Lizardcube is handling the game's art design (which looks good to me), Guard Crush Games is tending to the programming and Dotemu is doing the whole publisher thing. There's not a lot of information beyond that, sadly.

In a bizarre twist that is sure to please virtually no one, Dotemu has not announced specific console platforms for the upcoming title, or even a narrow release window. My own best guess is that we will see the game arrive on PlayStation 4, Xbox One, Switch and Steam at some point in early 2019, but all of that could be complete rubbish.

Are you excited to see Streets of Rage get a new lease on life? What are some other classic games and franchises you would particularly like to see get similar treatment?

If you enjoyed this Streets of Rage 4 article, you're encouraged to discuss it with the author and with other members of the site's community. If you don't already have an HonestGamers account, you can sign up for one in a snap. Thank you for reading!

© 1998-2021 HonestGamers
None of the material contained within this site may be reproduced in any conceivable fashion without permission from the author(s) of said material. This site is not sponsored or endorsed by Nintendo, Sega, Sony, Microsoft, or any other such party. Streets of Rage 4 is a registered trademark of its copyright holder. This site makes no claim to Streets of Rage 4, its characters, screenshots, artwork, music, or any intellectual property contained within. Opinions expressed on this site do not necessarily represent the opinion of site staff or sponsors. Staff and freelance reviews are typically written based on time spent with a retail review copy or review key for the game that is provided by its publisher.