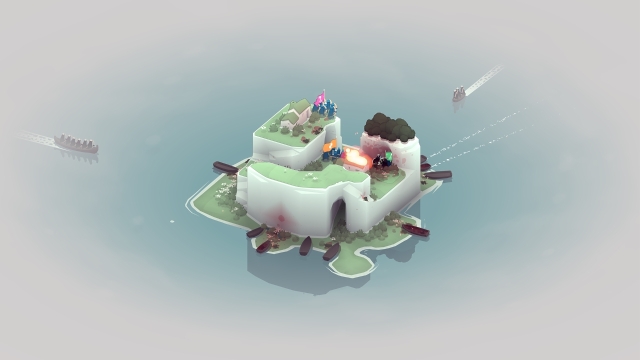 If you're ready to pay, you can play Bad North, Morphies Law or Prison Architect: Nintendo Switch Edition starting now.

Nintendo of Europe decided to get sneaky and today released a video focusing on upcoming "Nindie" launches. The games are headed to the Nintendo Switch hardware, and in fact, three of them have already arrived as of today.

Bad North is a real-time strategy game from Raw Fury. Players are tasked with defending their island sanctuaries from Viking invaders, while experiencing roguelite gameplay.

Morphies Law is another team-based shooter. This one has been shown previously, and its unique twist is that your abilities change according to your current size, so that you'll have to use strategy to know when bigger is better. That won't always be the case.

Prison Architect: Nintendo Switch Edition comes from Introversion Software and Double Eleven. It places you in charge of a maximum-security prison. You must find a way to maintain a profit, which places this one in a quirky branch of the more standard tycoon game.

The prices for the new arrivals are over the place. Bad North, which also will arrive on Xbox One in a little over a week, has a price point of $14.99 USD. Morphies Law, which currently is a Switch exclusive, goes for $19.99 USD. Finally, Prison Architect: Nintendo Switch Edition carries a hefty virtual sticker price of $29.99 USD.

As noted above, the games are all available right now on the eShop. Trailers are embedded above to give you a look at what each game plays like. Do you see anything you like?

If you enjoyed this Bad North article, you're encouraged to discuss it with the author and with other members of the site's community. If you don't already have an HonestGamers account, you can sign up for one in a snap. Thank you for reading!

© 1998-2021 HonestGamers
None of the material contained within this site may be reproduced in any conceivable fashion without permission from the author(s) of said material. This site is not sponsored or endorsed by Nintendo, Sega, Sony, Microsoft, or any other such party. Bad North is a registered trademark of its copyright holder. This site makes no claim to Bad North, its characters, screenshots, artwork, music, or any intellectual property contained within. Opinions expressed on this site do not necessarily represent the opinion of site staff or sponsors. Staff and freelance reviews are typically written based on time spent with a retail review copy or review key for the game that is provided by its publisher.