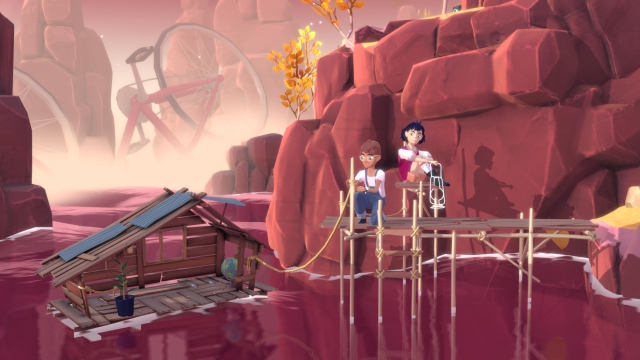 Flora, fauna, and time travel are headed to some of your favorite platforms.

The Voxel Agents has produced a new adventure game called The Gardens Between, which allows players to manipulate time as they lead two characters through a surreal, gardenesque world. The game arrives on Switch, PlayStation 4, Steam and the App Store on September 20, 2018.

The two friends in question are Arina, who is "headstrong," and Frendt, who is "thoughtful." They apparently share a remarkable history, which they will explore as they solve puzzles and ignite constellations and such. This isn't just your garden variety... garden game.

"It's our hope that players are not only touched by the story of Arina and Frendt, but that they take time to remember their own special relationships growing up," said Simon Joslin, co-founder of The Voxel Agents. "While so many of the objects featured in the gardens are from their own childhoods, we hope our audience will relate and recall a time when friendship meant everything."

Right now, Gamescom is fast approaching, so you know what that means: the game will be present at the show in Cologne, Germany. Then it will show up at PAX West, in case your passport isn't quite in order.

The Gardens Between will reach the aforementioned platforms with an MSRP of $19.99 USD. You can already add it to your wish list on Steam, and the version you buy can even be playable on Mac if that's your thing. If you're curious, you can find more information at the game's official site.

If you enjoyed this The Gardens Between article, you're encouraged to discuss it with the author and with other members of the site's community. If you don't already have an HonestGamers account, you can sign up for one in a snap. Thank you for reading!

© 1998-2021 HonestGamers
None of the material contained within this site may be reproduced in any conceivable fashion without permission from the author(s) of said material. This site is not sponsored or endorsed by Nintendo, Sega, Sony, Microsoft, or any other such party. The Gardens Between is a registered trademark of its copyright holder. This site makes no claim to The Gardens Between, its characters, screenshots, artwork, music, or any intellectual property contained within. Opinions expressed on this site do not necessarily represent the opinion of site staff or sponsors. Staff and freelance reviews are typically written based on time spent with a retail review copy or review key for the game that is provided by its publisher.