FullBlast is headed to Nintendo Switch, PlayStation Vita, PS4 and Xbox One 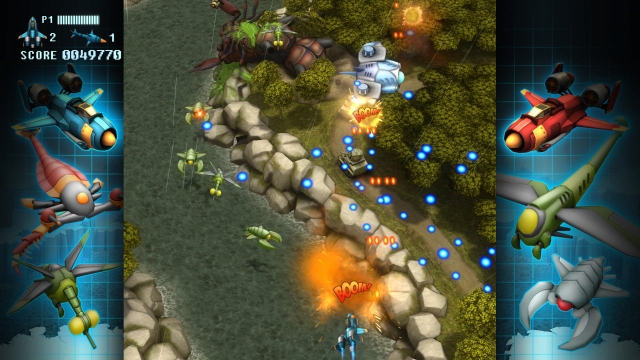 The game has a new publisher and will be available in multiple regions.

Ratalaika Games announced today that FullBlast, a vertical shooter developed by Ufo Crash Games, has been ported to Nintendo Switch, PlayStation Vita, PS4 and Xbox One. The game is due to arrive next month in North America for all systems, and will also arrive in Europe on Vita and PlayStation 4.

FullBlast was previously released for Nintendo's Wii U console in 2015 and published by Enjoy Up! in North America. It came to PC in 2016, but made its actual debut on the little remembered Ouya device.

Featuring a story campaign with 12 randomly generated levels, FullBlast supports local multiplayer, boasts three difficulty levels, and has a mission system and leaderboards. Numerous languages are supported, including Italian, Russian, Korean and Chinese Traditional, on top of the usual suspects. The game is even coming to Korea on several platforms, which should ensure it has an unusually wide audience.

A new trailer is available for the game's new port, so check that out above if you would like to see the game in action. Its prior releases received middling scores from the press, but FullBlast could still be one to watch if you're looking for more vertical shooters you haven't already conquered.

If you enjoyed this FullBlast article, you're encouraged to discuss it with the author and with other members of the site's community. If you don't already have an HonestGamers account, you can sign up for one in a snap. Thank you for reading!

© 1998-2021 HonestGamers
None of the material contained within this site may be reproduced in any conceivable fashion without permission from the author(s) of said material. This site is not sponsored or endorsed by Nintendo, Sega, Sony, Microsoft, or any other such party. FullBlast is a registered trademark of its copyright holder. This site makes no claim to FullBlast, its characters, screenshots, artwork, music, or any intellectual property contained within. Opinions expressed on this site do not necessarily represent the opinion of site staff or sponsors. Staff and freelance reviews are typically written based on time spent with a retail review copy or review key for the game that is provided by its publisher.