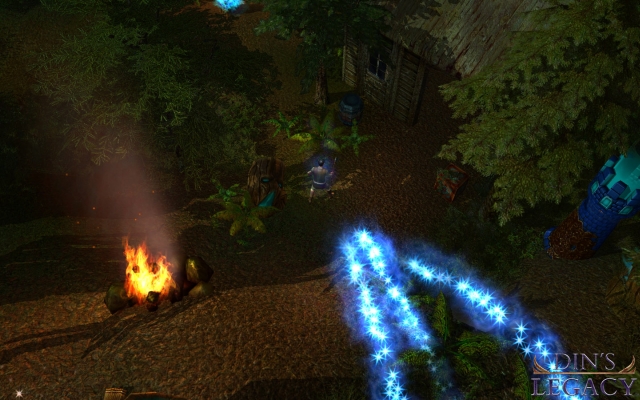 Now you can get a look at the upcoming niche RPG in motion.

Soldak Entertainment has been responsible for a variety of RPGs over the years, including Depths of Peril, Drox Operative and Zombasite. Now it is hard at work on a new title, Din's Legacy, which is scheduled for release in the fourth quarter of this year (though the developer indicates it "will be released when it's done").

Today, developer Steven Peeler distributed the first trailer for the action-RPG, which features around three minutes of gameplay that should give you a good idea what to expect from the final version. That trailer is embedded immediately below.

Din's Legacy takes place during the Orc Schism, a time when the race of Orcs was divided into three groups: Dark Orcs, Zombielords and the Mutated. Orcs from the last of those groups are trying to prove they're not all bad, even if their bizarre mutations suggest otherwise. They are now laboring on behalf of the trickster god Din, who sends them on missions to save the world and resurrects them if they happen to fall in battle while doing his bidding.

Game features include the usual sort of character customization (but with some added quirks, as you'll need to manage mutations), co-op multiplayer options, and a "dynamic, evolving, living world."

Soldak Entertainment makes games a little different from what most of the larger studios are producing these days, and has since it was founded in 2004 by Steven Peeler (who formerly worked at Ritual Entertainment). If you're searching for something unique, Din's Legacy looks like it could be worth your attention when it arrives later this year or sometime shortly thereafter.

If you enjoyed this Din's Legacy article, you're encouraged to discuss it with the author and with other members of the site's community. If you don't already have an HonestGamers account, you can sign up for one in a snap. Thank you for reading!

© 1998-2021 HonestGamers
None of the material contained within this site may be reproduced in any conceivable fashion without permission from the author(s) of said material. This site is not sponsored or endorsed by Nintendo, Sega, Sony, Microsoft, or any other such party. Din's Legacy is a registered trademark of its copyright holder. This site makes no claim to Din's Legacy, its characters, screenshots, artwork, music, or any intellectual property contained within. Opinions expressed on this site do not necessarily represent the opinion of site staff or sponsors. Staff and freelance reviews are typically written based on time spent with a retail review copy or review key for the game that is provided by its publisher.