Of Ships & Scoundrels leaves port in 2019 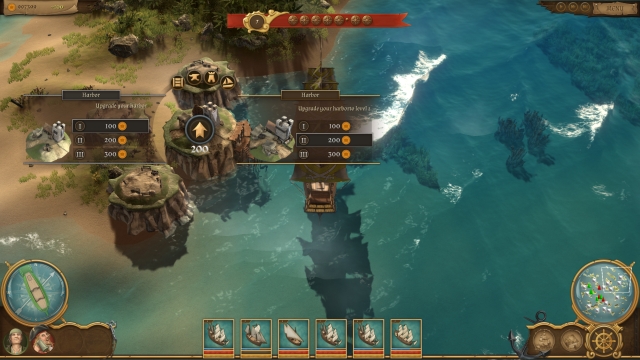 The naval warfare game is scheduled to arrive during the year's second quarter.

If you like games about ships blasting the plank out of each other with cannons, Of Ships & Scoundrels looks like it could be right up your alley. Its publisher, Assemble Entertainment, announced today that the title will arrive on PC & Mac during the second quarter of 2019.

Developed by Korion Games, Of Ships & Scoundrels lets you command a fleet of battleships through beautiful island scenery. As you progress, you'll wage war with enemies and even those you once counted as friends. Any alliances you can forge that will let you last a little longer in such a cutthroat environment are sure to be a good idea... or are they?

The game will support both hot seat and online multiplayer, and fuses turn-based strategy with more conventional action. The islands you will explore are procedurally generated to ensure you and as many as three local friends never run out of new places to explore. There also are day/night cycles to consider, plus you'll be able to expand your fleet and power them up in harbors that come under your control.

If it can live up to its potential, Of Ships & Scoundrels could be a neat way to pass the time next year, but I've been burned by naval games that looked terrific in the past. The original Kickstarter project to fund the game's development seems to have concluded unsuccessfully, but the game is still coming, so obviously someone believes in it and that is at least encouraging.

If you enjoyed this Of Ships & Scoundrels article, you're encouraged to discuss it with the author and with other members of the site's community. If you don't already have an HonestGamers account, you can sign up for one in a snap. Thank you for reading!

© 1998-2021 HonestGamers
None of the material contained within this site may be reproduced in any conceivable fashion without permission from the author(s) of said material. This site is not sponsored or endorsed by Nintendo, Sega, Sony, Microsoft, or any other such party. Of Ships & Scoundrels is a registered trademark of its copyright holder. This site makes no claim to Of Ships & Scoundrels, its characters, screenshots, artwork, music, or any intellectual property contained within. Opinions expressed on this site do not necessarily represent the opinion of site staff or sponsors. Staff and freelance reviews are typically written based on time spent with a retail review copy or review key for the game that is provided by its publisher.