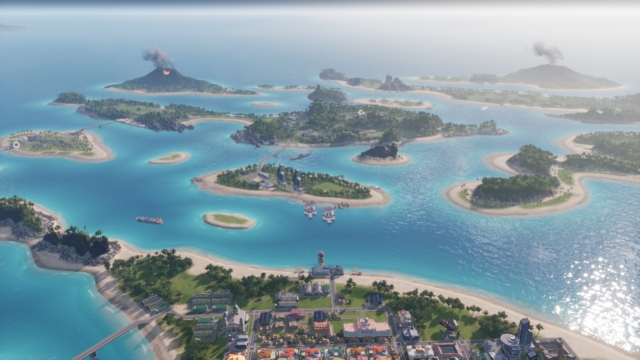 And a beta is coming even sooner than that...

Tropico 6, the latest in a long line of simulation/tycoon games that place players in the role of a dictator with awesome shades and an enviable beard, is headed to PC and consoles later this year. Kalypso Media revealed the news today, but gave all of the credit to "El Presidente."

According to the press release, Tropico 6 will arrive on PC in January of 2019. Console versions will take a bit longer, but you should be able to play the game on PlayStation 4 and Xbox One by the end of the summer. No Switch version was announced, and it's unlikely one is coming given the focus on visual polish.

"By using the Unreal engine for the first time in the series' history," notes the press release, "the world of Tropico has never looked more stunning, whether zoomed out for a full view of far-reaching archipelagos or watching each individual citizen go about their daily routines at street level."

Development on most previous installments in the series was led by Haemimont Games, but Limbic Entertainment is handling the task this time around. Founded in 2002 and based in Langen, Germany, the studio is perhaps best known for its work on Might & Magic X: Legacy for Ubisoft. Now it will try its hand with dictators.

The goal with Tropico 6, predictably, is to make it be "the biggest and greatest Tropico yet." There's apparently an emphasis on providing a complete and balanced take on island dictatorship, spread across four eras. In a franchise first, you'll be able to "manage extensive archipelagos, build bridges to connect your islands and use new means of transportation and infrastructure." You can also steal historical wonders, such as the Statue of Liberty and the Eiffel Tower.

Ahead of its release next year, Tropico 6 will be playable at gamescom in Cologne next week, in the consumer hall (Hall 8, B43) and by appointment with the development team in the business area (Hall 2.1, C10/D13). A closed Steam beta is also planned this autumn, to allow fans to shape the final gameplay experience with feedback they offer as part of that process.

If you enjoyed this Tropico 6 article, you're encouraged to discuss it with the author and with other members of the site's community. If you don't already have an HonestGamers account, you can sign up for one in a snap. Thank you for reading!

© 1998-2021 HonestGamers
None of the material contained within this site may be reproduced in any conceivable fashion without permission from the author(s) of said material. This site is not sponsored or endorsed by Nintendo, Sega, Sony, Microsoft, or any other such party. Tropico 6 is a registered trademark of its copyright holder. This site makes no claim to Tropico 6, its characters, screenshots, artwork, music, or any intellectual property contained within. Opinions expressed on this site do not necessarily represent the opinion of site staff or sponsors. Staff and freelance reviews are typically written based on time spent with a retail review copy or review key for the game that is provided by its publisher.