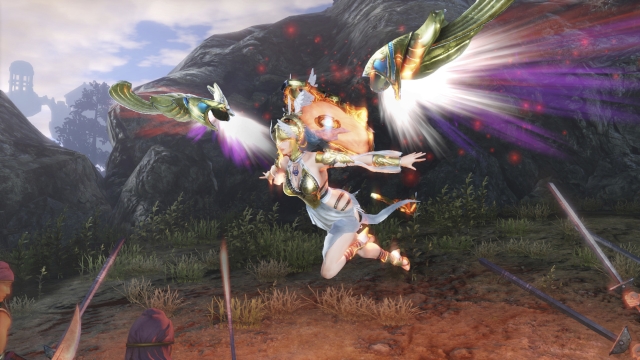 Powerful new forces are here to play, and they've brought their Sacred Treasures.

When Warriors Orochi 4 arrives later this year, it will feature appearances from a variety of characters you know and love from the Dynasty Warriors and Samurai Warriors franchises. You probably already expected that, but what you may not have expected is the appearance of four new gods.

The new arrivals are Perseus, Ares, Athena and Odin, presented in Warriors Orochi 4 not necessarily as you remember them from Greek mythology, but rather with a not completely surprising Japanese twist. Though their appearances may have evolved, however, they're still otherwise the gods you remember... assuming you remember your mythology.

Perseus is the "hero of Olympus," a demigod son to the infamous Zeus. He has heard his father is meddling in the human world again, and so he takes the side of mankind.

Athena, goddess of wisdom, has taken a break from turning into a mermaid and such. Or was that a different Athena? Anyway, she's off to capture Perseus, because she's not down with his current plans.

Ares has been the "god of war" since before anyone ever heard of Kratos, and that's the role he plays here. He has this weird idea that the gods should dominate humanity, and he'll use his twin spears to oppress all who would stand in his way. Bonus: the spears turn into the powerful dragon, Typhon.

Odin, rule of Asgard, has a weapon of his own: a powerful spear called Gungnir that summons magical blades to its tip so it can function as a drill. Now if he can find an electrical outlet, he's sure to pose quite the threat to his adversaries.

Koei Tecmo had more on its mind than just the announcement of a few new characters, impressive though they are. The publisher also revealed that those who pre-order the game's physical edition through select retailers will receive alternate costumes for Xu Shu, Mitsunari Ishida, Da Ji, Wang Yuanji, Wang Yi, Lady Hayakawa, Xingcai, Guo Jia, Takatora Todo and Yoshitsugu Otani. If you prefer to go the digital route and make your purchase through the Xbox Marketplace or the Nintendo eShop, you can receive all of the above plus an elusive unicorn and the mighty warrior, Pegasus. PlayStation Store purchasers instead receive Pegasus and a special theme related to the game.

Warriors Orochi 4 is headed west on October 16, 2018, and is slated to arrive on Nintendo Switch, PlayStation 4 and Xbox One in physical and digital formats. It will also be available on Steam, meaning you can basically play it anywhere you might expect and maybe even a place or two besides. Are you ready for the next chapter in the Warriors Orochi saga?

If you enjoyed this Warriors Orochi 4 article, you're encouraged to discuss it with the author and with other members of the site's community. If you don't already have an HonestGamers account, you can sign up for one in a snap. Thank you for reading!

© 1998-2021 HonestGamers
None of the material contained within this site may be reproduced in any conceivable fashion without permission from the author(s) of said material. This site is not sponsored or endorsed by Nintendo, Sega, Sony, Microsoft, or any other such party. Warriors Orochi 4 is a registered trademark of its copyright holder. This site makes no claim to Warriors Orochi 4, its characters, screenshots, artwork, music, or any intellectual property contained within. Opinions expressed on this site do not necessarily represent the opinion of site staff or sponsors. Staff and freelance reviews are typically written based on time spent with a retail review copy or review key for the game that is provided by its publisher.