VOEZ gets physical on the Nintendo Switch 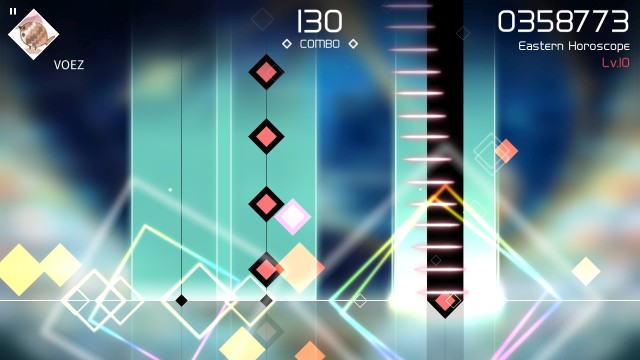 A new publisher for the launch window Switch game means a physical edition for fans to cherish.

acttil and PM Studios announced today that VOEZ has finally arrived in stores, most of a year and a half after its debut as a digital-only title during those heady first few days of the Nintendo Switch's availability.

Originally published by Flyhigh Works, VOEZ was controlled using the touchscreen. The new version features Joycon controls and options for those who wish to play with the console docked, "so all our VOEZ fans can enjoy every play option offered by Nintendo Switch." That's a nice sentiment.

VOEZ works as follows: a black horizontal line is positioned at the bottom of the screen, and notes slide down from the top of that screen on various lines. Players tap, hold, slide, or swipe notes--depending on the type of note--to clear stages and access new diary entries as they journey around a fantastic, aurally charged world.

VOEZ has three difficulty levels, more than 100 songs, and in its physical form includes all updates that were previously added to the game's digital edition. The physical version carries an MSRP of $39.99, and is available right now.

If you enjoyed this VOEZ article, you're encouraged to discuss it with the author and with other members of the site's community. If you don't already have an HonestGamers account, you can sign up for one in a snap. Thank you for reading!

© 1998-2021 HonestGamers
None of the material contained within this site may be reproduced in any conceivable fashion without permission from the author(s) of said material. This site is not sponsored or endorsed by Nintendo, Sega, Sony, Microsoft, or any other such party. VOEZ is a registered trademark of its copyright holder. This site makes no claim to VOEZ, its characters, screenshots, artwork, music, or any intellectual property contained within. Opinions expressed on this site do not necessarily represent the opinion of site staff or sponsors. Staff and freelance reviews are typically written based on time spent with a retail review copy or review key for the game that is provided by its publisher.