Death's Gambit lends its gothic charm to PC and PlayStation 4 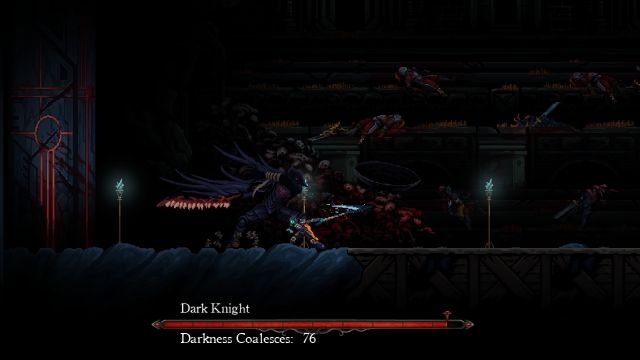 Test your nerves as you battle monsters on behalf of Death itself.

Death can be awfully busy claiming lives in the real world, so it only makes sense that some of the stuff going on in other realms would be outsourced. In Death's Gambit, a new game available today on PC and PlayStation 4, you're the hired help.

Recently revived from the dead, you'll enter the unforgiving land of Siradon, which is marked by "dark forests, medieval ruins, frozen wastes and more." Thank you, handy press release!

It all sounds a bit like Dark Souls to me, but only a hack would make that easy comparison at this point, so forget I said anything. Instead, consider the existence of seven playable classes, custom gear and talents. It sounds like there's some serious depth lurking somewhere under the hood, and you'll have to master a lot of it if you hope to survive against "beasts, knights, horrors, and undying guardians of the realm." Whoever wrote that press release really got into the spirit of things, eh?

Death's Gambit sounds difficult, but the inclusion of a "Heroic Mode" (where bosses get a second chance to kick your butt) and a New Game+ sound like they could capably dish out even more pain to those who are gluttons for such things. Is that you?

If you enjoyed this Death's Gambit article, you're encouraged to discuss it with the author and with other members of the site's community. If you don't already have an HonestGamers account, you can sign up for one in a snap. Thank you for reading!

© 1998-2021 HonestGamers
None of the material contained within this site may be reproduced in any conceivable fashion without permission from the author(s) of said material. This site is not sponsored or endorsed by Nintendo, Sega, Sony, Microsoft, or any other such party. Death's Gambit is a registered trademark of its copyright holder. This site makes no claim to Death's Gambit, its characters, screenshots, artwork, music, or any intellectual property contained within. Opinions expressed on this site do not necessarily represent the opinion of site staff or sponsors. Staff and freelance reviews are typically written based on time spent with a retail review copy or review key for the game that is provided by its publisher.