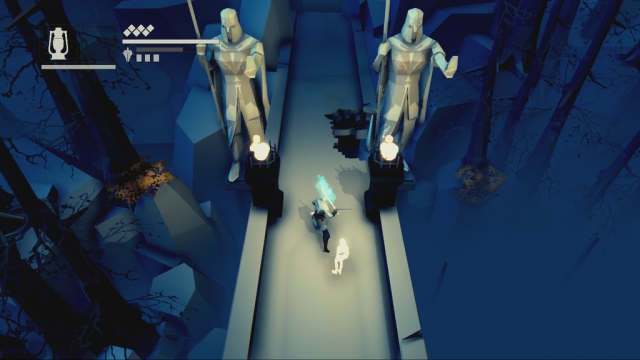 Because it is coming to multiple platforms, in multiple regions, of course...

Fall of Light: Darkest Edition is coming soon to Xbox One, PlayStation 4 and Nintendo Switch, publisher Digerati announced today. You'll be able to download it on your favorite console very soon, but the exact day depends on where you live and which system you prefer.

First, Fall of Light arrives on Xbox One, on August 14. Next, it reaches PlayStation 4 on August 21st and 22nd (first in North America and then a day later in Europe). Finally, on August 23, Nintendo Switch owners will be able to snag it.

Originally arriving on Steam in 2017, Fall of Light has since been enhanced for this "darkest" edition, so that it includes an all-new dungeon with new enemies, traps, and weapons. Sometimes, it pays to wait.

In Fall of Light, players explore a world shrouded in darkness. You are Nyx, a battle-hardened warrior who is traveling with his luminescent daughter, Aether. The two heroes must stick close to one another if they are to see the perilous journey through to its conclusion.

Here is a list of game features, straight from the publisher:


Fall of Light is the debut title from indie studio RuneHeads, and was inspired by the likes of ICO and Dark Souls. Check out the trailer embedded above and decide whether you're up for a journey through darkness...

If you enjoyed this Fall of Light: Darkest Edition article, you're encouraged to discuss it with the author and with other members of the site's community. If you don't already have an HonestGamers account, you can sign up for one in a snap. Thank you for reading!

© 1998-2021 HonestGamers
None of the material contained within this site may be reproduced in any conceivable fashion without permission from the author(s) of said material. This site is not sponsored or endorsed by Nintendo, Sega, Sony, Microsoft, or any other such party. Fall of Light: Darkest Edition is a registered trademark of its copyright holder. This site makes no claim to Fall of Light: Darkest Edition, its characters, screenshots, artwork, music, or any intellectual property contained within. Opinions expressed on this site do not necessarily represent the opinion of site staff or sponsors. Staff and freelance reviews are typically written based on time spent with a retail review copy or review key for the game that is provided by its publisher.