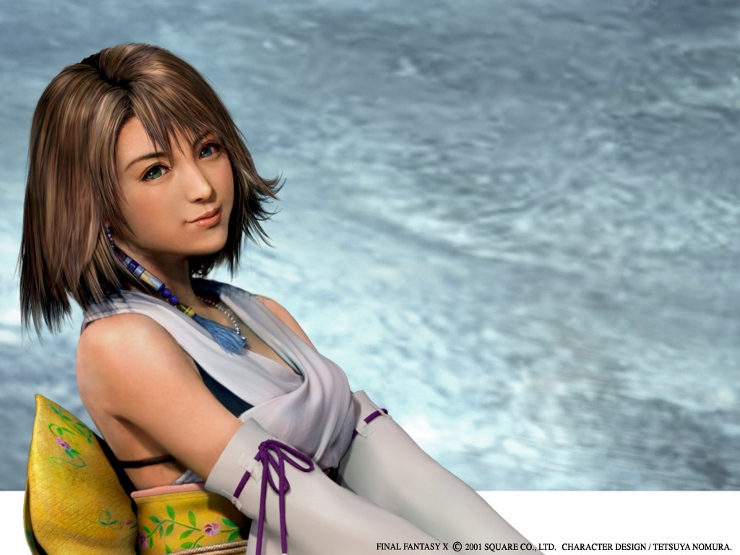 I like the Final Fantasy series. Around the year 2000 when I first stumbled upon this whole video game reviewing scene (at GameFAQs and later HonestGamers), I was barely able to define an RPG. I remember getting frustrated at playing games I thought were RPGs and people saying Nope, thats not an RPG. But I was playing the role of a character in a story most these games were more properly classed as adventure games.

In 2001 I let my anti-PlayStation bias go and bought a PSone (damn fine looking console). I picked up a copy of Final Fantasy VII, as this was the game Id heard the most about. This was the main RPG of the PlayStation era. I remember being very impressed by the opening cinematic, of the city of Midgar, and then zooming into the blocky characters jumping off the train. I almost laughed at how absurd they looked.

Then the screen swirls and suddenly were in a battle mode, where the graphics have taken on yet another style. This one shows the characters and enemies in more detail, and I finally see Cloud for the first time. Hes more than a few blond spikes on a baggy purple jumpsuit.

At this time, I wasnt familiar with turn-based combat, either. But it was pretty simple. The bar filled up, and then I pressed attack. Cloud took down the enemy soldier with one slash of his oversized sword. Then the other soldier stepped forward and raised his gun to fire and it didnt do too much damage to Cloud. This was weird. In the first five minutes, the game had showcased three very distinct styles of graphics

I ended up loving the game. It took me some time. I had to learn how RPGs worked. I had to get around some of the odd translations (Attack when the tail is up! OKAY! and itll counteract with the laser FFFFFFUUUUUU!!!).

The game blew my mind when we left Midgar, and I suddenly became aware that a much larger world awaited. Id spent five hours in Midgar, dodging the Turks and infiltrating Shinra HQ and this really was just the opening act of something much bigger.

I think I finished FF7 at around 60 hours the first time. Id gotten to know the characters a great deal. At the time, it was probably the longest Id ever spent on a video game with a story (although a drop in the bucket compared to SimCity 2000).

I picked up FF8 next, and didnt like it much. I came back to it much later and I did end up liking it. I just had to not use summons the entire game. It was amazing how much that improved the game.

I picked up FF9 as that had recently been released, and this quickly became my favourite of the series at the time. The presentation of the game was much more even. I liked the characters. The game had more humour and more heart. It didnt seem as serious as the last two games.

I was aware that there were older Final Fantasy games. None had ever been released in Australia, though. I had a Super Nintendo, but the idea of finding FF4 or 6 on them was impossible. Id need a converter and have to spend over $100 for a cartridge. Id spent $30 each on FF7 and FF8 as they were on the platinum range, and probably about $70 for FF9. I was still in high school and I wasnt made of money.

Luckily, the PSone versions were being released, although not in the same way as the US. Final Fantasy VI was released (with a disc containing some FMVs from the upcoming FFX). I liked VI. It was a very captivating game. FFIV and V were released together as Final Fantasy Anthology. I didnt beat either game. To this day, I still havent managed to finish FFIV, though Ive started it about half a dozen times across almost as many versions. I just cant get into this game. FFV was also a little too much for me at the time, although I started replaying this late last year (put on hold when FFXV came out).

Final Fantasy Origins collected I and II soon after. This one was more than a port, it was a graphical update. FF1 was a simple enough game, and I played it and beat it. I didnt get very far into II.

Final Fantasy X was released (months after the US release) and this became my favourite game of all time (and this hasnt changed in the 15 years since I played it for the first time). This is a story I will still revisit from time to time. My love for this game hasnt diminished. Ive beaten this one more than any other Final Fantasy game.

Final Fantasy III was released on the DS at some point, but I got maybe half way through this.

X-2 was embarrassing to play, but I did like the battle system and the way the job system worked. I was interested enough in Yunas story to play this through to completion.

XII was okay. The first half was great, but the Moogle Gate almost killed it for me. Especially when the game had made fun of these pointless fetch quests in the opening act. I powered on through and finished the game, but never went back to it.

XIII was bad. Ive said all Im going to say about this one in a review. XIII-2 was nonsensical. Lightning Returns I havent played, but Ive heard its bad.

XIV I picked up cheap, but due to time constraints I only played it about 3 times during the 30 day trial and decided MMOs werent for me. Id have to play this and nothing else to get my moneys worth. This was after the update that fixed the earlier crap version. I dont know if this is a good game or not. Id need to be unemployed for a few months to really get into this.

FFXV, I liked. I already reviewed that recently.

The various spin offs I like or dont like to varying degrees. Ill do a quick rundown of scoring.