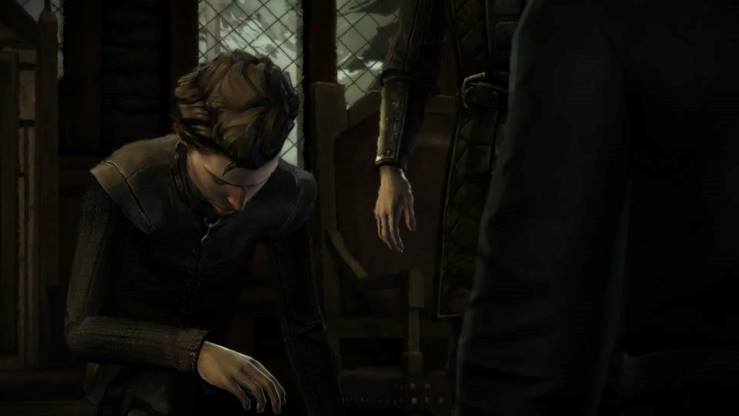 I've been enjoying TellTale's episodic adventures since their humble Sam & Max days (and wow have they come a long way since then!). But I know that their promise of monthly releases does tend to become "every other month" and they love ending each episode on a cliffhanger. As you do. I remember playing the waiting game for Tales of Monkey Island. The wait between Episode 4 and 5 was agonising.

So after that, I basically resolved to only get into a TellTale series once the final episode had wrapped up, so I could just make my way through them at my own pace. This worked well for me for Back to the Future, Sam & Max: The Devil's Playhouse, and The Wolf Among Us. Still haven't gotten past episode 2 of Walking Dead, yet. But I'll get there.

Anyway, Game of Thrones. Loved the books, love the TV series. I was willing to wait for this one to be finished, as I know full well what it's like to wait for the next installment for this particular series.

But hey, it was on sale and I'm kept so busy these days I'll barely even notice a month or two.

So, episode 1 - my impressions because I'm too lazy to review it.

* It took most of the episode for me to learn who was who in the Forrester family, but I think I get it now.
* Some interesting dialogue choices I hope will come into play in future episodes.
* Cersei is somehow more terrifying when she's questioning YOU and twisting your words. You lose that safe disconnect you get when you're watching TV - Cersei is menacing there, but also quite fun to watch.
* Thankfully Tyrion was also there.
* I like how the inclusion of main characters feels authentic and not forced - Ramsay Snow's visit sounds like the sort of mission his father would send him on.
* That cliffhanger ending - it felt a lot like the first episode of the TV series where things are going along as expected, and then BAM, end of the episode we're left with a kick in the gut.

Episode 2 is out soon, so I won't need to wait too long. But after that? :S

I continue to play the odd story mission and get my ass kicked whenever I venture out too far into the wilderness. Seriously, some of the difficulty jumps between invisible region barriers are ridiculous.

But I'm really into this one. Better than the first one, and waaaaaay better than the second one. Enjoying the character interaction, too. 25 hours in and no sign of things wrapping up, so I'll gather my party and venture forth.

Played one game with friends and it crashed late game. It's freaking Assassin's Creed Unity all over again. Get it together, Ubi Soft!