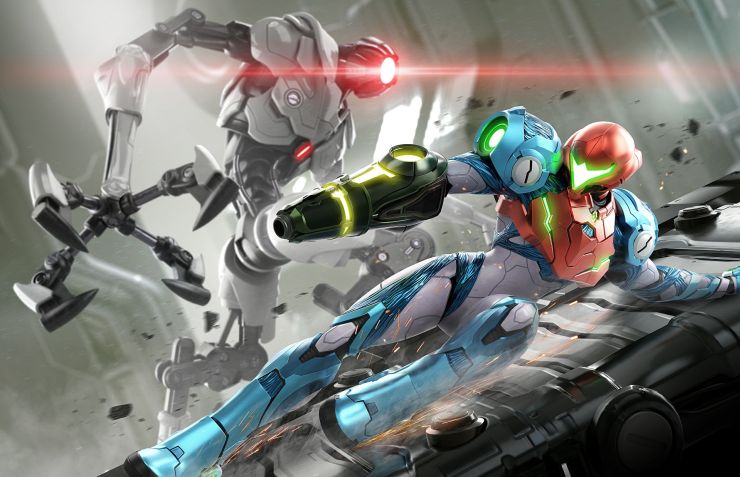 Deathloop (PS5) - It took me awhile to warm up to it, but this is a fantastic game. Think Dishonored as an FPS. Just really fun to to mess around with all the weapons and powers, big open levels that allow you to accomplish objectives in a variety of ways. My biggest issue is I feel the online component hurts the game. Basically you can lose a lot of progress on death and it can be a long way between checkpoints. I honestly liked the game more when I realized you could abuse closing the game before it saves on death to prevent a new loop (you have to hit a button on the Game Over menu to confirm a save - makes it pretty easy). That way you lose more like 15-30 minutes of progress rather than 1-2 hours.

Metroid Dread (Switch) - I've wanted an HD 2D Metroid since the Wii U came out. Fantastic game. Great level design, very helpful in-game map, excellent boss fights, really fun toolset and gameplay mechanics. EMMI encounters can be very tense. The game has some minor problems though. It feels like a very safe sequel - not many new abilities and the ones that are new aren't that interesting. The art and atmosphere is generic too (especially compared to Super Metroid and Fusion) and the OST kinda sucks. The game also suffers from framerate drops and fairly long load times between zones.

Lost Judgment (PS5) - Disappointing. Not a bad game but one of RGG studio's weaker releases. The story is a lot weaker than its predecessor and really goes off the rails in the final acts. Judgment series continues the trend of adding "detective" activities that aren't fun. This one introduces: climbing walls with an Metal Gear Solid 2-esque grip meter, extremely simple stealth sections, slowly walking around playing hot & cold with a sensor, walking a shiba with a keen sense of smell. This would be in lieu of more of the great combat you'd get in classic Yakuza. The side content is also worse than usual. There's far fewer of the usual wacky side cases instead replaced with "School Cases" where Tak fills in as a School Club advisor. Most of which involve playing mini games and really boring stories about school kids. Unfortunately these clubs tend to go own for twice as long as they should meaning even fun mini games like the motorcycle death races and boxing get tedious before they're finished. The RTS robotics club mini game is largely considered the worst mini game RGG has made and I could not stomach the 3-4 hours of it, thus I never finished these damn school cases. Sometimes I get the feeling the game was rushed due to COVID. The combat is thankfully still fantastic and Tak's new Snake style focusing on grapples and parries was extremely fun to play. They also made tailing missions far less frequent, shorter and just overall work better, so it's got that going for it too. Due to a contract dispute with the lead actor's talent agency blocking Steam versions of the Judgment games, this might be the premature end of the series. It would be shame not to see these characters in another, hopefully better story, but Judgment is simply a less fun Yakuza. So maybe that'd be a good thing.

FIST - Forged in Shadow Torch (PS5) - Easily the most pleasant surprise this year. A very solid, meaty metroidvania. The combat is excellent. Basically you unlock fighting game strings with each of the 3 major weapons. The best part is when you start stringing together combos. It's a bit jank through. A lot of silly looking clipping, you frequently get attacked during screen transitions, the music sucks and loops very obviously. There's some awkward level design too (2 back to back slow, underwater zones - what a terrible idea). The map is pretty big and the ability toolset is very fun. It's actually longer than Metroid Dread but the latter feels more polished and doesn't feel anywhere near as sluggish to backtrack. The final boss is also needlessly challenging.

Evil Tonight (Switch) - Super cool 2D overhead survival horror game. Surprisingly good atmosphere (especially the sound design/music). A bit hard on "Normal" but you can save scum the hell out of it due to infinite saving. Would have also benefited greatly from an in-game map and the first major puzzle is a bit fucked due to the visual clue being far too subtle, but highly recommended. Only about 4 hours long for $15.

ActRaiser Renaissance (PS4) - Definitely a regretted purchase and may be a drop. I'm a big fan of Quintet but this remake is not as fun as the original. Ok, so clearly this is a mobile phone game thrown onto consoles. The graphics are pretty hideous with a lot of ugly enemy renders that look low-res. The action sections are also piss easy in this version thanks to an absurdly large MP pool and a new system where you collect crystals to incrementally strengthen you attack and magic (fill the meter and all you damage is DOUBLED). The biggest problem is they added a lot of content to the simulation portion to the point where it's 75+% of the experience. Now there's really bad RTS sections that involve building various defensive structures. Guess how you make them. Sit there staring at your village until they decide to give you resources. I love sitting around for 20+ minutes before I can play the damn game. The weirdest part is you can't move or build anything during the battle, so you place structures blindly without knowing where enemies will spawn or which types. Essentially means late game a lot of starting a fight just to see where things should be placed then quitting. Just feels tedious. I'm on the 5th realm and not sure I can stand doing another sim section after this. Yuzo Koshiro's arranged OST absolutely kicks ass though. This is definitely a project that keeps me questioning if Square-Enix management is clueless. Here's some free better ideas for SE: release the classic Final Fantasies for Switch, remaster Vagrant Story and Parasite Eve, let Crystal Dynamics remaster or remake Soul Reaver.

-Definitely playing SMTV this coming Friday
-Deltarune Chapter 2 at some point
-Still really want to play Psychonauts 2 but also was hoping to get a Series X. Unfortunately they seem even harder to find than PS5s. Might see if the PS4 versions goes on sale around black friday.
-Interested in Guardians of the Galaxy and House of Ashes at some point but would imagine they'll be half off on black friday.
-Would like to play Voice of Cards but feeling a bit burned after spending $30 on ActRasier. The demo was fun and I'm a big fan of Yoko Taro though
-Maybe Diablo 2 Ressurected if it goes on sale?