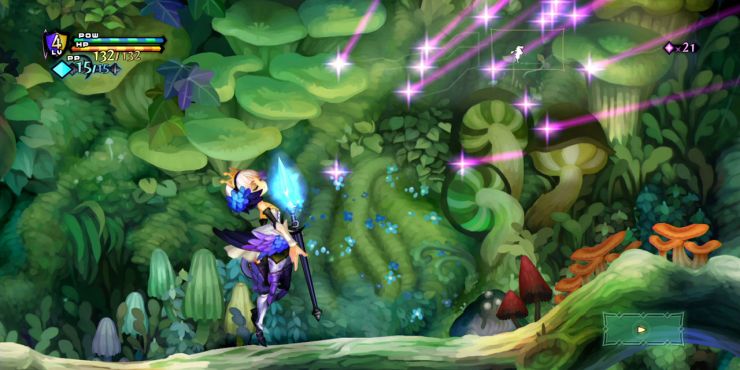 Odin Sphere: Leifthrasir (PS4) - I'd been putting off playing this for years namely because I wasn't very fond of the PS2 original - a game that looked pretty but was a chore to play. Leifthrasir is fortunately a total overhaul with significantly improved combat mechanics and a streamlined experience system that de-emphasizes growing plants. It still suffers from the another problem of the original namely you're essentially playing a remix of the same game 5 times. I'm currently on my 4th character and it's getting old. I also vaguely recall the 5th character, Velvet, not being that fun to play as. Hopefully her moveset is better now. Game is still very gorgeous of course. OST is by the guy who scored FF Tactics, and it's very solid. Pretty much just playing this for something shortish to pass time until Ratchet and Clank releases on Friday.


Resident Evil Village (PS5) - Really good! Basically feels like a first-person RE4, and I liked it a lot more than RE7. Definitely a lot more crazy. Really strong art direction. My biggest complaint is the last 2 hours get too FPS-heavy for my taste, but overall a solid entry that unfortunately doesn't quite reach the highs of the series' best (i.e RE2, RE1 Remake, RE4).


Returnal - This would have been my current GOTY if it weren't for a couple really inexcusable flaws. As a preface, I really don't like roguelikes and I was pretty hesitant with this one. Pretty much only bought it due to the rave reviews. The gunplay is fast and exciting and I love the art direction. Makes good use of the DualSense too. That said, the lack of a suspend save feature is idiotic. The game is split into 2 Acts with your main objective being to defeat the end boss of each. This is a roguelite in that some progress gets saved between runs - namely permanent Metroid-like upgrades that allow you to gather more resources on subsequent runs and previously defeated bosses don't need to be refought to move to new zones. That said, you easily have 2-4 hour runs with no real way to take a break. I got trapped a couple 3 hour sessions where I wanted to stop. The game recommends putting the console in Rest Mode in these situations, but that's dubious at best with the PS5. The one time I tried, the game crashed and I lost an hour of progress. I don't see why Returnal can't have a suspend save feature when much smaller games like Hades do, or when Fire Emblem has been doing it for decades. You could argue Housemarque wants to avoid save scumming by those who back up their saves, but I'd argue the vast majority of users won't know how to do that. Seems dumb to worsen the experience for the majority to discourage a small group of players.

My other major complaint is the final zone is pretty bullshit. I strongly considered dropping the game entirely because I wasted hours trying to finish the last zone. The enemies there are really frustrating and it's very easy to get one bad room and lose an hour on a build. The preceding areas overall felt more fair - basically you could overcome the challenge by learning enemy attack patterns & playing smart. The final area feels like you need good weapon drop luck because 90% of the weapon types suck there (Hallowseeker Rifle with Portal Beam trait is broken as fuck). It's really boring to spend 40+ minutes building a run only to lose it not 5 minutes into the new zone because the sub-boss does an instant melee attack for 70% of your health. The way I actually finished the game was by watching a 16 minute speedrun and basically copying the strats (spoilers: I ran past everything). And overall I seemed to do better than most players: finished it in 26 deaths and 16 hours. 18 hours to get the TRUE ENDING. Beat all but 1 boss my first try (and that was only because I got to one with next to no health). Good game, but this genre is repetitive and dumb. I would still recommend playing this if you have a PS5 (but who does?).


Immortals: Fenyx Rising (PS5) - This game was a slog to play through and it didn't need to be. Very strong foundation with excellent combat mechanics and Zelda-style puzzles. Beautiful art direction too. Unfortunately this is an Ubisoft open-world game so it's full of unnecessary content bloat. I absolutely adored my first 10 hours and then there were a lot of ups and downs for my remaining 25. There's like 10-12 hours of content here and it's SPREAD THIN. You do a lot of the same puzzles over and over and over. It really wants to be Breath of the Wild but I don't recall BotW requiring you to jump through so many hoops to open a chest. I feel like I had to put blocks on pressure plates at least a thousand times. You fight a lot of the same enemies only they get recolored and scaled up to match your power. One of the game's low points involved a mandatory dungeon where I had to fight the boss FOUR TIMES to complete it. And then there's the story. Extremely cringey try-hard humor. One of the running jokes is Zeus is gay for Achilles. Ok. Guess I didn't absolutely hate it since I spent 35 hours on it, but maybe I shouldn't have. Not recommended.