Custom tiles are hardly a new thing in the world of homemade RPGs; its one of the first things the RPGM community will chew you out on should you dare release a game with the serviceable generic assets in place, but there was nothing pre-made that really suited Haven. The hub used to be a lush field with vibrant greens, because thats what half the readily-available tiles are. Theres still an element of that now; things are still lush and relaxing to highlight that this is a safe space away from the troubles you might find out there. Its just that, now, its all housed on a floating earthen platform with dubious pitch black eyes that shift around. Shiftily.

It would be hard to construct Haven with only the stock tools of caves, forests and castles on hand because Haven is a game about insanity. The games not yet complete, the vast majority of whats currently available takes place within the protagonists mind as he battles his subconscious for supremacy of his own thoughts. Its a concept worth exploring; the initial stage has him speaking to the embodiment of his own ideas, some discarded and turning rogue, others gaining a sense of sobering independence in the hallways of his mind. The protagonist can chat to some of these, be ignored by the majority who filter in and out of existence and fend off others who attack him. His own alter egos, sub divisions of his personality, can aid him in battle. 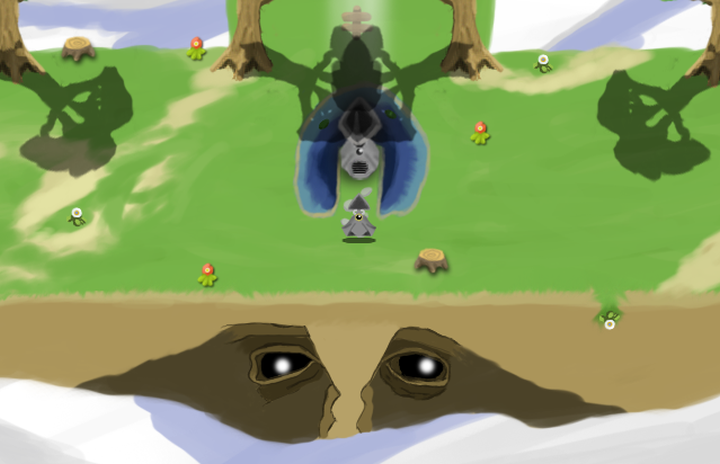 There are a few things I like about Haven, but one is how youre dropped into the world without text dumps of back-back story and tedious information. Clerils given up on the real world and diverts all his efforts trying to live a peaceful life in the confines of his mind, and, rather than be exhaustively told about the complexities of this, youre left to figure it out as you go along. Snide back-and-forth discussions with The Jester alter ego make reference to how Cleril has abandoned his sex drive, which is hinted further at when the cast speak of a banished ego, The Flirt. There are fragments of her previous existence scattered around the place, hinting at what was, but her expulsion is left ambiguous. So far.

You explore his mind through a series of snappy dungeons which never hang around long enough to wear out their welcome. The random encounters are not overly easy, but you can back-track to Haven any time you want to completely refill your health and MP - Sanity and Ink in this case. There are déjà vu spots littered throughout which serve as teleportation spots giving you free access to what have thus far been already very short and manageable levels. Boss fights that loiter at the end are all part of your mind that are either rebelling or following orders Cleril has unknowingly set. Defeating those open up new areas or offer greater control of self. The mechanics of a staple RPGMaker are all present, but theyve been twisted to fit. Sometimes, this doesnt quite work. Theres little telltale signs of the titles current state of incompleteness. Like how the end-of-battle screen still tries to give you gold in a game that doesnt employ such materialistic means. Theres a little note telling you the screen itself is still only a thing to prevent a crash. Sidequests and yet to be plumbed in and the game lacks a final boss fight and a conclusion.

It was disappointing not to see my journey through to the end, because the highlights thus far have been the sharp and abrupt tone changes when the tale switches from Clerils battle for his mind to the real world that bookmark chapters. In his head, the conversations he makes with himself are often whimsical and relaxed, but snatched moments in the waking world are punctured by bubbles of disturbing irrationality and mindless desperation. In his dark, forgotten room, there is no one to converse with, no hope to be found, relegating him to feral acts of pure survival manufactured to keep him alive until the next time he can retreat into his mind. Haven is a study of what happens when you embrace madness so fully that it circles back on itself, and the desperate lengths you might go to in order to make it your new norm when the world behind your eyes is more appealing than the world in front of them.

You can visit Havens Greenlight page by clicking here