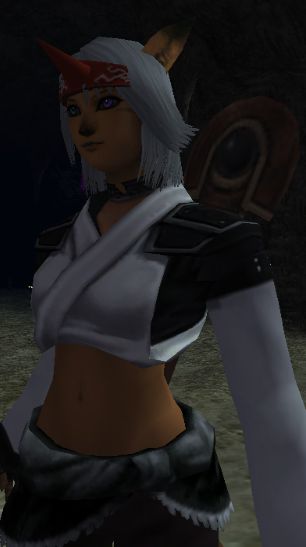 For a year and a half, this young lady served as my avatar in the vast, expansive world of Vana'diel, the setting of Final Fantasy XI. Given the option to begin as one of six classes--the same six the party in the original Final Fantasy could choose--I elected to set out as a Black Mage, my control over the arcane knowing no bounds. I imagined myself slinging spells of flame, frost, and lightning to my heart's content, frying any monster foolish enough to cross my path. As I stepped out of the gates of the mining city of Bastok, I gripped my Onion Staff tightly and memorized my default spell of Stone and placed it in my spell list,

I stepped out into the land of Gustaberg, a barren land filled with wormlike creatures that protrude from the ground and turtle-esque beastmen known as the Quadav. My Stone spell was mostly ineffective against these earth-aligned beasts, so I brandished my Onion Staff and began to whack away. Very... Slowly.

I was in for a long ride.

As luck would have it, a random passerby who would later become a very close friend decided to help me out. She taught me early ways of making gil, how to use the auction house to my advantage, and tossed a little coin my way so I'd be wearing something a little more substantial than a flimsy stick and a white loincloth that barely covered my catgirl ass. She introduced me to her Linkshell, a collection of friends united under a common banner that in any other game would be called a "Guild." Though I was completely new, I was welcomed in as if I had been around forever. People offered to help me out by showing me where to level up at, who to talk to in order to get Final Fantasy XI's story rolling and how to make the most efficient use of the Job system. I learned that by taking up a Support Job, my weakling of a Black Mage could inherit some stats from the other job, while simultaneously being able to use every ability the Support Job had, up to half of my main job's level. Of course, I had to get the Support Job to that point by making it my main job and leveling it up first.

Thus, Espiga the Black Mage became Espiga the White Mage, and my path of wanton destruction shifted to a friendlier role, as parties invited me to fight alongside them, healing their wounds and buffing their defenses with spells like Protect. Before long, my White Mage was ready to become a Support Job, and I was now Espiga the Black Mage/White Mage, able to lay waste with my powerful spells and even toss a quick Cure if need be. It was then that a whole new world opened up to me. By completing certain quests, I could unlock up to 14 additional jobs, bringing my total to 20, which I could switch between whenever I wanted by returning to my Mog House, a customizable room that's in every city. These 20 jobs each have their roots in Final Fantasy games of ages past, as favourites like Blue Mage, Paladin, and Dark Knight make a powerful return. But me? I chose to become a Summoner, and I embarked on my own journey of discovery in Vana'diel.

Traveling around the world, I had to reach Protocrystals hidden throughout the most dangerous lands in all of Vana'diel in order to obtain Avatars, the summoned monsters of this world. With friends in tow, I set out on my own pilgrimage similar to Yuna's quest in Final Fantasy X yet still completely different. Tidus from the very same game put it best: this was my story.

Time passed, and I grew along with my friends. Some of us parted ways to other Linkshells, some decided the game was no longer appealing to them, and some of us soldiered on, fighting, discovering, and adventuring together. We'd help each other complete storyline missions, which would unravel Vana'diel's deep history and secrets. We uncovered the secret that two brothers of an ancient race, the Zilart, held, and even fought a God in our bid to protect Vana'diel from disaster.

But as time continued to flow, I had come to see everything that Vana'diel had to offer. Seeing the same areas no longer held the sense of wonder they once did when I had first arrived in Vana'diel. The time had come. Espiga's story was to come to an end.

At the time of this writing, it's been months since that day. Final Fantasy XI has continued on without me, as one might expect it would... But with a recent update increasing the level cap to 80, I decided on a whim to leap back into Vana'diel and see what else has changed... Though there was certainly one thing that hadn't.

As I stepped out of my Mog House for the first time in months, I announced to the city of Whitegate that I had returned! I wasn't expecting much of a reply, but my expectations went unfulfilled. Old friends came out of the woodwork, delighted that I had returned. People began to send me messages and were shouting in Whitegate as if I were a soldier finally returning home from war. Although some Linkshells require potential members to submit applications, a Linkshell full of my friends instantly accepted me as if I were a member all along; such was the strength of the bonds I had made. It was at that time I realized what Final Fantasy XI's greatest appeal was. It's neither the tactical battle system, nor is it the graphics that still hold up today. It's not the beautiful music by Naoshi Mizuta and it's not the long, cutscene-driven storyline that rivals everything Final Fantasy's offline counterparts can muster. It's the bonds that you form with your adventuring companions, each who have their own story to tell, and each who are willing to help create moments just like this: 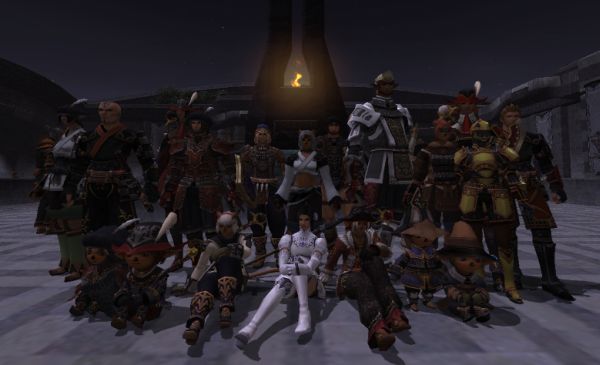 If you enjoyed this Final Fantasy XI review, you're encouraged to discuss it with the author and with other members of the site's community. If you don't already have an HonestGamers account, you can sign up for one in a snap. Thank you for reading!

© 1998-2021 HonestGamers
None of the material contained within this site may be reproduced in any conceivable fashion without permission from the author(s) of said material. This site is not sponsored or endorsed by Nintendo, Sega, Sony, Microsoft, or any other such party. Final Fantasy XI is a registered trademark of its copyright holder. This site makes no claim to Final Fantasy XI, its characters, screenshots, artwork, music, or any intellectual property contained within. Opinions expressed on this site do not necessarily represent the opinion of site staff or sponsors. Staff and freelance reviews are typically written based on time spent with a retail review copy or review key for the game that is provided by its publisher.