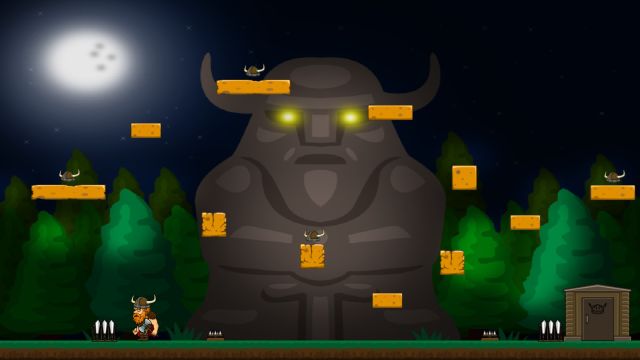 I want to believe that in some alternate reality, the title Scream of the Viking is attached to an awesome, bloody display of Norse brutality. I can only imagine a warrior roaring into the sky, mead in hand, Odin smiling down upon him, a kraken's tentacles wrapping around his ship just before squeezing it to pieces. Heavy metal music blasts as our hero falls into the water, swinging the biggest damn sword you've ever seen, cutting the beast to ribbons. I want to believe this because in our reality, the name is associated with a substantially less badass experience.

Hell, I would even call it milquetoast in comparison, and completely unbefitting of such an awesome moniker...

This game is one of the legions of delisted, rudimentary platformers once offered on Steam. It comes from LTrust, who also crafted the equally abysmal I'm Turkey. Scream, as it turns out, is pretty much I'm Turkey repackaged with viking trappings. As with the aforementioned poultry-inspired mess, this one is a platformer composed of twelve single-screen levels. Each stage consists of floating platforms, a handful of spiky traps and a locked door. The door serves as an exit, and the only way to open it is to collect horned helmets resting on some of the platforms. Never mind that you're already wearing a helmet, because apparently you need dozens more of them.

Right out of the gate, you might notice that the only soundtrack is the whir of your computer. That's because there is no sound whatsoever--or if there is, it didn't come through for me. There are no sound-modifying options, either, which leads me to believe this is a 100% silent game. Your leaps don't have that joyous boing found in many platformers, and your feet hit the ground without so much as a patter. The protagonist even dies quietly, never stopping to scream, grunt, gurgle blood or curse when suffering a horrible, impaling end. Face it: aside from your system, the only things you're bound to hear are your own desperate sighs. 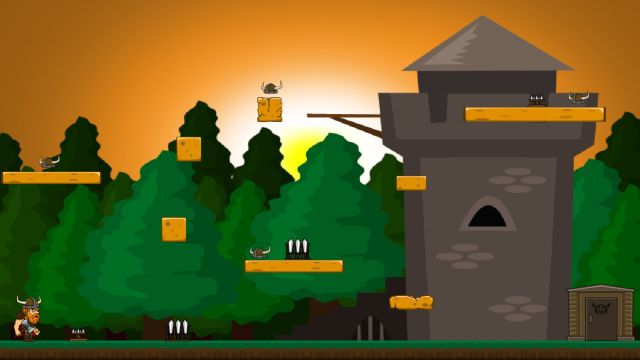 The visuals are as plain as can be, although the protagonist admittedly looks somewhat cool. However, all you see for miles are colorful, generic environments with the occasional fortress or ship in the background. Besides that, this title is as visually boring as you might suspect, decked out with stereotypical indie graphics that resemble bad web comics.

After you've had a chance to take in those initial sensory bits, you reach down and grab your trusty Xbox controller, only to find there is no controller support. Rather, you're limited to the arrow keys on your keyboard. No, you don't get to swing your axe. Apparently, you just carry one as a fashion statement. You know, a vanity weapon...

You might believe this is quickly, easily done affair because stage designs are so primitive. However, this title can't even get that part right, mostly because its mechanics range from wonky to unresponsive. Your movements are extra wobbly, making it needlessly difficult to make a few precise jumps. This issue becomes all the more problematic when you realize faulty collision detection also abounds. Now and then you'll land a tight jump right next to a trap, having not touched it whatsoever. Regardless, you still perish as if you've run headlong into it, despite there being a clear gap between you and the sharp points. 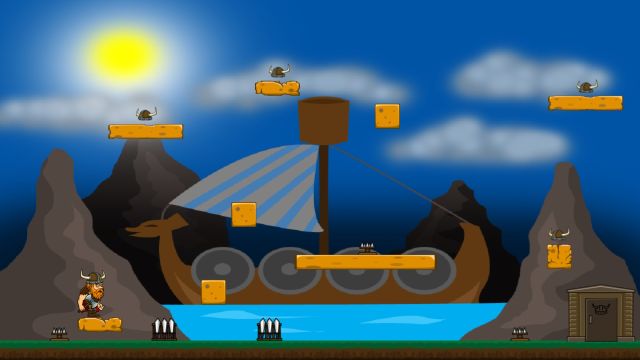 Really, you should be thankful you were even able to jump in the first place. Fairly often, the Up key refuses to respond, and you usually end up careening into a bed of spikes that you should be easily avoided. Make no mistake, you will croak a lot on some levels, but not because you were bested. Instead, the lion's share of your deaths boil down to buggy play control, as if the game itself wasn't play tested. For instance, you'll attempt to hop over a gap between platforms, only to find yourself plummeting to the bottom. From there, it's about a fifty-fifty shot if you'll be able to clear the next impediment without running into it. You're basically at the Up key's mercy at all times.

Sometimes, though, the crummy mechanics work in your favor. If you jump into a platform just right, you'll stick to the side of it. From there, you can leap upward and on top of your target, thus continuing the quest without death. I know it's nice to beat the system once in a while, but advantages like this only further underscore this game's cheapness. 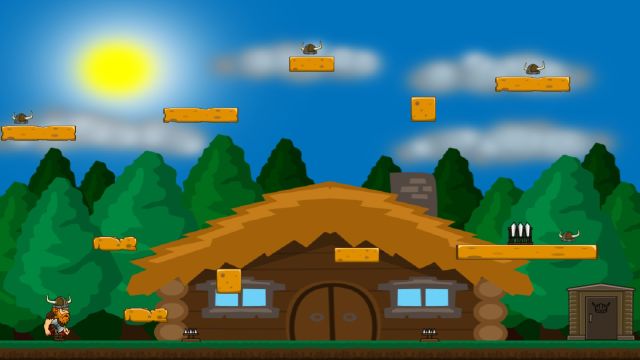 However, the gauntlets you face aren't all brutal. Occasionally, you run afoul of a level so simple that it's almost insulting. A few of them require you to climb to high ledges to snatch some of the helmets, while the traps all lie so far out of reach that they would never be a problem. You might wonder why someone would banish them to a far corner, and the design choice makes you wonder if the layout for every level wasn't just randomly thrown together in short order.

After about fifteen or so minutes, you should have all of the stages complete, even with all of the aforementioned woes in place. Your reward is absolutely nothing; no ending, no credit roll, no congratulatory remarks. Hell, the game doesn't even take you back to the title without fanfare like most lousy products. Instead, the level selection screen reappears, as if the game wants you to choose a completed level and continue your suffering indefinitely. I would tell you to skip this platformer, but it's been delisted from Steam. So I'll recommend the next best thing: don't bother searching for it, and just let it slip into the blackness of the obscurity. Hopefully one day it'll be so forgotten that the title, Scream of the Viking, can be reused on an actually worthwhile piece of Norse-themed media.

If you enjoyed this Scream of the Viking review, you're encouraged to discuss it with the author and with other members of the site's community. If you don't already have an HonestGamers account, you can sign up for one in a snap. Thank you for reading!

© 1998 - 2023 HonestGamers
None of the material contained within this site may be reproduced in any conceivable fashion without permission from the author(s) of said material. This site is not sponsored or endorsed by Nintendo, Sega, Sony, Microsoft, or any other such party. Scream of the Viking is a registered trademark of its copyright holder. This site makes no claim to Scream of the Viking, its characters, screenshots, artwork, music, or any intellectual property contained within. Opinions expressed on this site do not necessarily represent the opinion of site staff or sponsors. Staff and freelance reviews are typically written based on time spent with a retail review copy or review key for the game that is provided by its publisher.