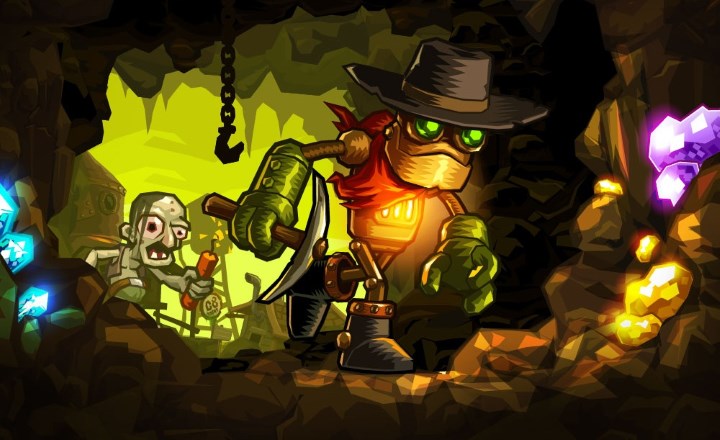 Say there, pardner, how would you like to be a cowboy?

"Hooray!" you shout with glee.

And how would you like to run your own mine?

"That sounds mighty fine," you reply with hesitancy, "but I have concerns about silicosis."

Not to worry! You can also be a robot who doesn't have to breathe!

"Yippee!" You squeal, and away you go with Steamworld Dig.

Ah, cowboy robots. You wouldn't think that such a combination of cowpoking and sci-fi would work, but somehow it does. No doubt Firefly set the precedent for that. It also seems to be what Image & Form Games does best. This was also evidenced by their other game, Steamworld Heist, which was one of the better titles of 2015. Dig is the ostensible prequel to that game, though there are very few similarities between the two aside from their setting and subject matter.

Anyway, you play as a little robot miner named Rusty who has just inherited his uncle's mine. The goal of the game is to make it profitable again, I guess. You do this by digging out rock and dirt and then selling the minerals and gemstones you find. If you make enough money, you will attract new citizens and shops to the nigh-deserted town of Tumbleton. Steamworld Dig is purely a single-player affair; it is not Terraria nor is it Minecraft, though I suppose you could argue that there are some similarities. It is story-driven, though the plot is pretty vague in the beginning. It does lead somewhere, but takes a while to gain momentum. 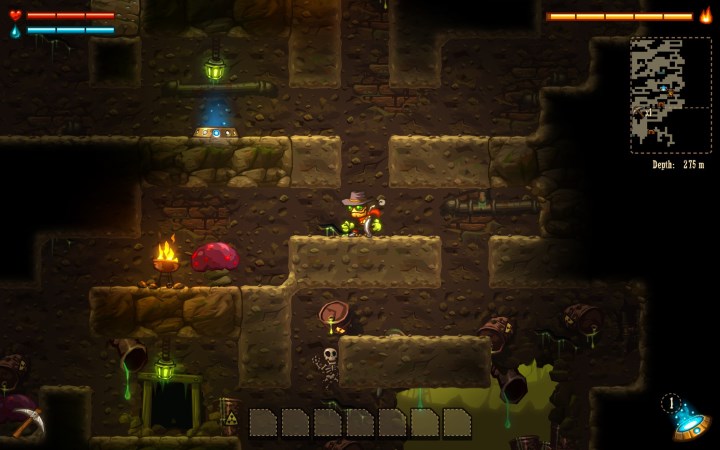 As for how it plays... Do you remember Dig Dug? Probably not, as that game is hella old, but nevertheless, Steamworld Dig reminds me a bit of that game, too. The main difference is that the goal is not to simply to kill critters, though there is some of that. Instead, it focuses mainly on collecting treasure so that you can upgrade your robot to collect even more treasure. Occasionally you will bash a monster in the face with your pickaxe, but much less often than you might think. Mostly you will be engaged in the repetitive process of platforming, digging, and collecting. Such a one-note structure might seem boring, but trust me  Its not.

Somehow, Image & Form have struck the exact right balance to keep you hooked in the throes of gaming addiction with Steamworld Dig. As Rusty digs further underground, you will be compelled to dig a few more meters, then a few more. Your mini-map helpfully keeps track of every passage youve carved out in real-time. And when you reach a challenge cave  which is basically a platforming section filled with traps and puzzles  youll decide that youll stop playing riiight after that. But wait, you just got a new upgrade for Rusty that you have to try out, so youll quit right after that. Wait, no, youll actually stop playing when you cash in your loot after you get back to town. Which is super easy to do, as you have a portable teleporter at your disposal. And its just as easy to get back into the fray to do more digging. Then, after a few dozen meters more and a few more challenge caves, you realize that its 1:00 a.m. and you have work in the morning. Fuck.

This is helped along by the fact that Steamworld Dig is very easy to control. Rusty can run, slide and wall-jump with ease, even with the keyboard. There are a few challenge caves that are tricky and may require some retries, but overall the difficulty rests in the perfect one-size-fits-all intermediate spot. Which is probably a good thing, considering that there are no difficulty settings to choose from. 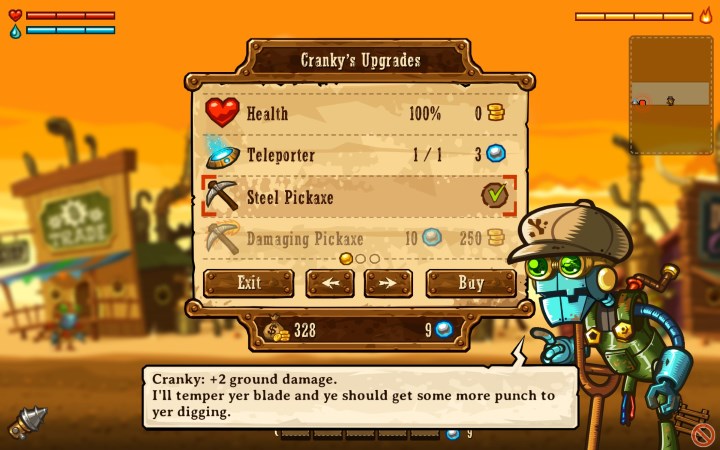 Also, in true Metroidvania style, Steamworld Dig is constantly providing you with new tools to play with. Your pickaxe receives upgrades to dig faster and kill monsters quicker. A drill allows you to dig through tougher rock. A rocket fist grants you that ranged attack youve been pining for since the early game. A steam-powered jump allows you to reach new heights. You receive a constant trickle of rewards for your labours, and the pace is surprisingly quick.

In fact, if there is a major criticism to be had here, it is exactly that. This game is sort of a flash in the pan and it is over quite quickly. I logged about ten hours with it on Steam, and some of those hours account for AFK time. For a game that is so densely packed with content, its surprising that they didnt try to stretch out its length a little. I think that they certainly could have, and it would have been just as enjoyable. As it stands, Steamworld Dig feels a bit too short for what you pay for it. However, considering that the games price tag is a mere $10, thats a small gripe. Image & Form is an indie studio after all, so perhaps they were simply warming up for Steamworld Dig 2, which I hear is currently in development.

Either way, if you decide to give it a try, it will be ten hours well spent. It is a fun, inexpensive indie title that is worthy of your time.

If you enjoyed this SteamWorld Dig review, you're encouraged to discuss it with the author and with other members of the site's community. If you don't already have an HonestGamers account, you can sign up for one in a snap. Thank you for reading!

© 1998 - 2022 HonestGamers
None of the material contained within this site may be reproduced in any conceivable fashion without permission from the author(s) of said material. This site is not sponsored or endorsed by Nintendo, Sega, Sony, Microsoft, or any other such party. SteamWorld Dig is a registered trademark of its copyright holder. This site makes no claim to SteamWorld Dig, its characters, screenshots, artwork, music, or any intellectual property contained within. Opinions expressed on this site do not necessarily represent the opinion of site staff or sponsors. Staff and freelance reviews are typically written based on time spent with a retail review copy or review key for the game that is provided by its publisher.