As the release date for Rayman Legends on Wii U drew nigh, I decided that I should probably preorder it instead of trusting on the local department store to receive sufficient inventory. So I loaded up the games page on Amazon, and a yellow bar appeared at the top with an Instant Order Update reminder. It turns out I had already placed a preorder for the item on August 7, 2012, more than a year ahead of its eventual release date. The page didnt comment that I was a forgetful dufus, because it respects me as a person.

When it was originally announced with a much earlier release date in mind, Rayman Legends was going to be exclusive to the Wii U platform. It was kind of a big deal at the time, because the game looked awesome and it was an early feather in Nintendos otherwise mostly featherless cap. Then the system sold very poorly right out the gate, and Ubisoft pushed back the release date and announced that it would also be producing Xbox 360 and PlayStation 3 editions. The biggest platforming adventure in Raymans history needed to reach a wide audience, and the Wii U install base wasnt going to provide that all by itself. 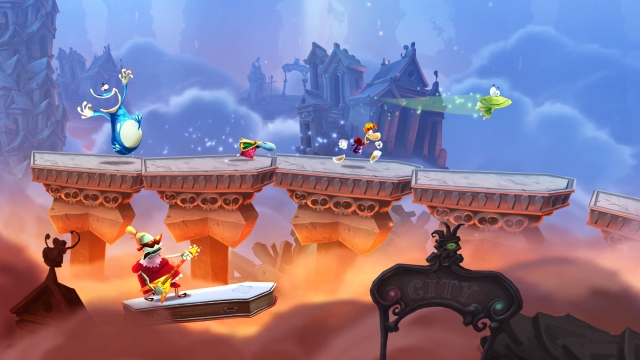 Unfortunately, releasing the game on a number of different platforms doesnt seem to have done the trick, either. Its relatively difficult to find anyone who has played Rayman Legends, regardless of console, and thats a shame because the game is excellent, easily one of the best platformers Ive had the joy to play in years. Fewer people should let themselves miss out on experiencing it.

Despite being sufficiently interested in Rayman Legends that I wound up ordering the game a full year ahead of its release, Im actually a rather casual fan of the series overall. I really enjoyed Rayman Origins when it arrived as a Vita launch title, but before that my experience with Rayman and friends was limited to various Raving Rabbids titles and assorted earlier releases. I almost always had fun with them, but then I all but forgot they existed because the character doesnt really excite me. For that reason, I couldnt tell you much about the story in this newest outing, and I figure thats just fine. Narrative isnt the real appeal. Its the crazy platforming action that hooked me.

Like Rayman Origins, the new game allows multiple players to run and jump through breathtakingly beautiful environments. The lush, painted backdrops from the previous game s are mostly gone, but the more three-dimensional stuff you see this time around is still a treat for the senses. Theres some great character animation, too, whether that be Rayman or his many friends. Characters grin and grunt, glare and stare, and it all looks every bit as good as it would in a Saturday morning cartoon. Rayman himself is still--as always--the least interesting character on display, but he makes it work because he is part of such a colorful cast. 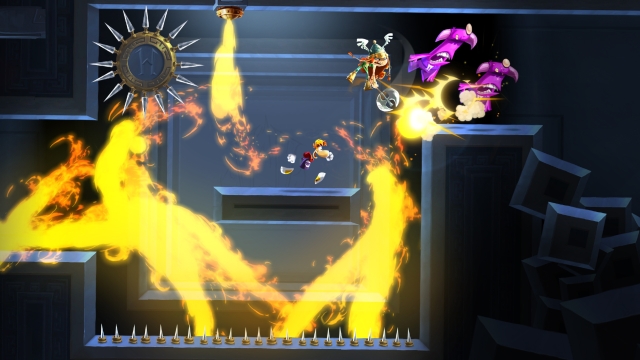 When youre playing with friends, you typically have the option to join as many as four other chums on a romp through the aforementioned environments. Four players grab controllers and the fifth player can use a character named Murphy, who is controlled using the gamepad. As Murphy, you are able to interact with the environment. Sometimes thats optional, just a way to make it easier for your friends to traverse challenging environments, but in other cases its required. An obstruction must manually be lifted before anyone can advance, or a ledge must be hauled into position so everyone can clear a wide gap. Murphy is invulnerable to attack, but cant interact directly with enemies except to tickle and distract them. Hes like a toothy version of Navi from Ocarina of Time, but without the chatter.

Murphy is an excellent addition to the gameplay, because some players are naturally more skilled than others. In a multi-player environment, I have to practice up a fair bit before Im anything better than rubbish, even though I cleared Rayman Origins just fine all by myself. So when I played with friends, I spent a lot of time--until the later and more difficult levels, ironically--in charge of the floating little green hero. Meanwhile, my two gaming companions leaped and wall bounced and swam and floated through the dynamic environments. Its the most fun Ive had with a simultaneous multiplayer platformer in my life. Im sorry, Mario, but youve been beaten.

If you like the sort of experience that Rayman Legends offers, as my friends and I do, then theres more good news: the game is huge. There are a number of themed worlds, each with around seven or eight gorgeous stages to explore. As you clear those, you sometimes gain scratch-it tickets. They reward you with virtual currency to unlock characters, or sometimes with other surprises that include additional stages taken from Rayman Origins. There are a bunch of those stages, so that it feels like youre actually getting two full--and wonderful--games with a single purchase. Then, on top of that, Ubisoft has included new challenges that unlock. Youll play through timed challenges relating to stages youve already cleared, and some of those can be incredibly demanding. There also are daily challenges that offer rewards, so youre rewarded for signing in each day and trying something new. 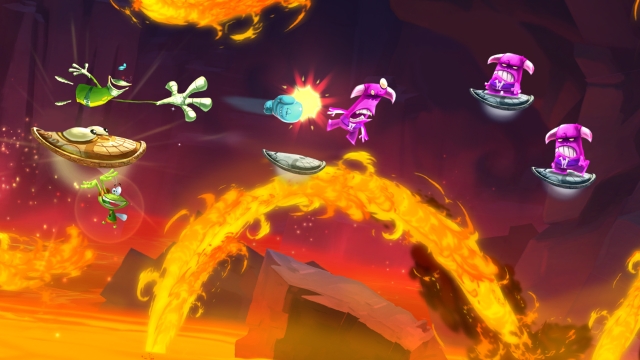 Rayman Legends is definitely ambitious, then, and its very creative with its design. Theres a series of levels I particularly liked that requires the players to work in concert as they sneak past security systems, for example. You must make mad dashes from one safe point to another while Murphy manipulates blocks and you stay out of sight. It felt very Splinter Cell to me. Musically-themed levels also return, providing a musical rush through treacherous environments while pipsqueak voices sing popular pop songs or mariachi tunes. Near the end of the game, as you unlock final areas, these get a little too devious for their own good--with effects that sometimes turn the screen to static and messed with my eyes--but for the most part they are well-executed.

Another mark in the games favor is its generally forgiving difficulty. Aside from some of the stuff I mentioned that you encounter near the end of the experience, youll have little reason to feel frustrated. Rayman and friends control every bit as beautifully as they look, whatever you have them doing, and they pass enough checkpoints that you seldom lose much progress if everything goes wrong. Theres no need to worry about running out of lives, and things keep going as long as at least one hero remains alive to free his or her cohorts from the bubble prisons that encase them when they meet an untimely end (Murphy can do the same thing, even more easily).

With gorgeous graphics and a pleasant soundtrack, precise controls, inventive level design and a massive campaign that includes enough content for several conventional platformers--almost all of it top-notch--its easy to fall in love with Rayman Legends, its easy to ignore a few extremely minor flaws and its easy for me to recommend that you make the game your next Wii U purchase if youre into that sort of experience at all. Should Ubisoft see fit to release a follow-up, Im fairly certain I wont need Amazon to remind me that Im buying it.

If you enjoyed this Rayman Legends review, you're encouraged to discuss it with the author and with other members of the site's community. If you don't already have an HonestGamers account, you can sign up for one in a snap. Thank you for reading!

© 1998-2021 HonestGamers
None of the material contained within this site may be reproduced in any conceivable fashion without permission from the author(s) of said material. This site is not sponsored or endorsed by Nintendo, Sega, Sony, Microsoft, or any other such party. Rayman Legends is a registered trademark of its copyright holder. This site makes no claim to Rayman Legends, its characters, screenshots, artwork, music, or any intellectual property contained within. Opinions expressed on this site do not necessarily represent the opinion of site staff or sponsors. Staff and freelance reviews are typically written based on time spent with a retail review copy or review key for the game that is provided by its publisher.