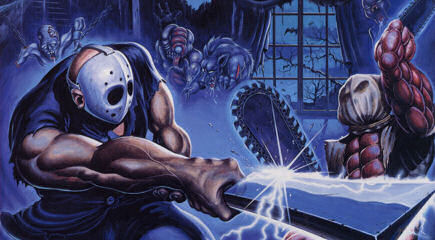 And now, a charming little game that assaults your senses with all the force of a claw hammer to the brainpan.

Seeking cover from an approaching storm, Rick and girlfriend Jennifer stumble onto an old, abandoned mansion secluded in the woods. In a remarkable series of coincidences, this just happens to be the home of Dr. Herbert West, a madman rumored to have performed the most bizarre and grotesque of experiments in his attempts to reanimate dead tissue. Jennifers blood-curdling screams suddenly emanate from inside the manor just as a flash of lightning bursts across the sky; the next thing we see is Ricks lifeless body, felled by some unseen horror. Yet a sinister presence recalls Rick to the world of the living  awakening with what appears to be a hockey mask bonded to his face, our hero must rend his decaying hosts from limb to diseased limb as he attempts to rescue Jennifer from a fate worse than death within the depths of the SplatterHouse. 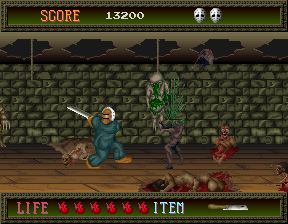 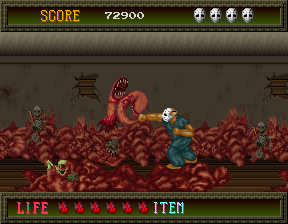 Besides patronizing the same outfitter as Jason Voorhees, Rick is likewise a hulking ghoul practically bursting with sinewy muscle from beneath his ragged clothes. Hes easily capable of reducing your average zombie to a pile of bloody pus with his bare knuckles  but most of the time hell be placing those meaty hands on a number of weapons with which to bludgeon, mutilate, and otherwise inflict grievous anatomical harm upon the many freakish horrors inhabiting the West mansion.

While strolling by piles of decomposing corpses and veritable mountains of raw organs heaped atop each other like cordwood, youll find that even the backgrounds are full of life. Chained zombies vomit up pools of toxic slime in Ricks path before falling limp in their shackles, while the others thrash about helplessly due to being impaled upon wooden stakes. Meanwhile youre busy pummeling the green and purple-skinned ghasts quickly approaching from all sides, our heros fists turning them into unimpressive ooze. Ho hum, right? But wait  someone has thoughtlessly left a large cleaver lying unattended on the floor! Thus armed, you can quickly lop a zombies head clean from its malformed shoulders, the offending appendage soaring high into the air as a shower of gore cascades from the creatures torn neck. 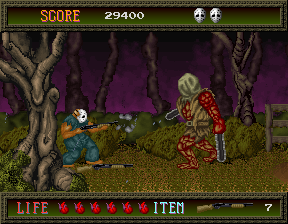 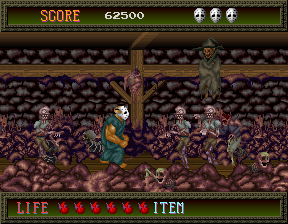 Yes, the wanton cruelty of SplatterHouse is what really makes it worth sinking one's teeth into, much like the famished parasitic leeches that soon bore out of the surrounding rancid flesh to feast upon Ricks warm, tasty blood if given the chance. Hungry for more? The ever-popular third level takes us into a gloomy forest surrounding the house for a midnight stroll beneath the rain and crackles of thunder. Bulbous deformed carcasses twist slightly in the wind as they hang from ropes in the trees, splitting open upon impact to discharge large puddles of oozing glop. Skinless canines creep forward to snack upon the remnants of your slain foes; interrupt their meal and itll be your own flesh that faces their piercing howls and cutting jaws. But the real kicker is the gigantic leathery-skinned thing thats lurking up ahead; with its misshapen head tightly wrapped within the confines of a cloth sack and whirring chainsaws grafted to the stubs of its arms, this disfigured killer growls in pain even over the whining blades as you empty your shotgun into its massive chest.

The moody, bass-filled musical score ranges from creepy and subdued to pounding, frenzied beats depending on the scene, going a long way to establish the horrific atmosphere alongside the booming sound effects. In addition to the high-pitched shriek of those rusty saws, youll be able to hear the satisfying crack of a possessed chair shattering into pieces or the wail of a translucent female phantom as she fades into nothingness. When trudging through a murky sewer, slimy creatures rise from the muck and loudly moan after a 2x4-hefting Rick smashes them into a sludgy mess against the wall. Fall into a dusty basement filled with dead bodies, however, and a skeletal necromancer floats overhead to conjure up hordes of the walking dead with his ominous chants.

Of course, thats only if you find the basement. Certain levels feature branching paths  pits or ladders that lead to various alternate areas and might even allow you to circumvent a difficult scene. More often than not, however, it seems like taking the plunge will only put you in an even worse situation than before. You can't afford to take too much time considering whether to risk it either, as crackling tendrils of purple ectoplasm will start inching towards Rick from behind if he remains in the same place for too long. 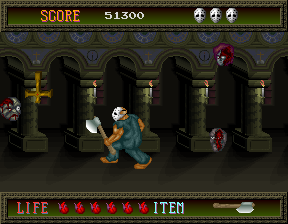 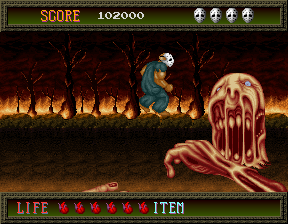 Unfortunately avoiding all these dangers is easier said than done thanks to some pretty sluggish controls. Rick walks slowly and jumps stiffly, often resulting in unfair damage or accidental pitfalls, and his sliding kick requires such precise timing that pulling it off is more luck than anything else. Its absolutely necessary to minimize the amount of damage you receive throughout each level and conserve Ricks spare lives for that undoubtedly putrid boss waiting at the end, which can be a frustrating task given the issues with the controls.

But its a lot easier to overlook those issues with a game that has such a wicked sense of style, which is precisely what sets the arcade original on a level quite apart from its handful of toned-down console sequels (with one obvious exception). You always want to see what horrors are going to come next, whether they turn out to be pits crawling with disembodied hands giving you the finger, your own reflection smashing its way after you in the hall of mirrors, or simply a giant inverted cross protected by waves of rotting heads. Long before Mortal Kombat became the poster child for digital violence, Rick was traipsing through tunnels of skin to battle embryonic horrors that latch onto him only to burst into an ichorous mess.

Will this masked man save both Jennifer and himself from the promise of a hideous demise, or is this story destined to end in tragedy? Like a festering sore burrowed deep within a wreck of desiccated flesh, two decades later SplatterHouse can still turn heads.

Before it chops them off, anyway.
4/5

If you enjoyed this Splatterhouse review, you're encouraged to discuss it with the author and with other members of the site's community. If you don't already have an HonestGamers account, you can sign up for one in a snap. Thank you for reading!

© 1998-2020 HonestGamers
None of the material contained within this site may be reproduced in any conceivable fashion without permission from the author(s) of said material. This site is not sponsored or endorsed by Nintendo, Sega, Sony, Microsoft, or any other such party. Splatterhouse is a registered trademark of its copyright holder. This site makes no claim to Splatterhouse, its characters, screenshots, artwork, music, or any intellectual property contained within. Opinions expressed on this site do not necessarily represent the opinion of site staff or sponsors. Staff and freelance reviews are typically written based on time spent with a retail review copy or review key for the game that is provided by its publisher.