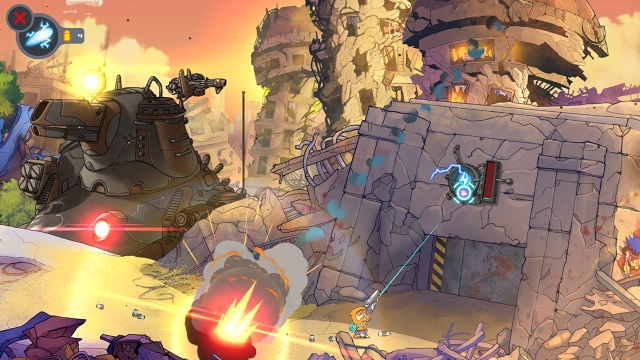 The run 'n gun title is available now to download on the Nintendo eShop.

Rise & Shine, which arrived on various other platforms in January of last year, is now also available on Nintendo Switch, publisher Adult Swim Games announced today in a press release. Nintendo also announced the arrival, because that's the sort of thing Nintendo does on a Thursday morning.

For the unaware (i.e. people who haven't read EmP's review for the PC version), Rise & Shine is a run 'n gun shooter. Think Contra or Metal Slug or Gunstar Heroes, except with differences here and there that you may or may not love.

Rise & Shine, by description of both today's press release and EmP, is a lethal sort of adventure. If you're not having a hard enough time of things, there's also a Hard and a Turbo mode to really challenge you, though I'm the sort of coward who gets a bit nervous just reading a comment like "Be ready to respawn -- a lot!" And that gem comes straight from the press release.

"Blast swarms of zombies, robots and enormous bosses," suggests that same press release, "then swap to guided projectiles to overcome intricate mazes of dangerous hazards and unlock the way forward. Every level in Rise & Shine is a single, continuous work of hand-drawn art, flowing seamlessly as you dash through chaotic environments of deadly traps, missiles and enemies."

So anyway, you can currently find Rise & Shine on the Nintendo eShop, where it fetches $14.99 USD. Or you can snag it on a PC, PlayStation 4 or Xbox One digital storefront, if you prefer. Who knows? Maybe you'll have a blast with it!

If you enjoyed this Rise & Shine article, you're encouraged to discuss it with the author and with other members of the site's community. If you don't already have an HonestGamers account, you can sign up for one in a snap. Thank you for reading!

© 1998-2020 HonestGamers
None of the material contained within this site may be reproduced in any conceivable fashion without permission from the author(s) of said material. This site is not sponsored or endorsed by Nintendo, Sega, Sony, Microsoft, or any other such party. Rise & Shine is a registered trademark of its copyright holder. This site makes no claim to Rise & Shine, its characters, screenshots, artwork, music, or any intellectual property contained within. Opinions expressed on this site do not necessarily represent the opinion of site staff or sponsors. Staff and freelance reviews are typically written based on time spent with a retail review copy or review key for the game that is provided by its publisher.