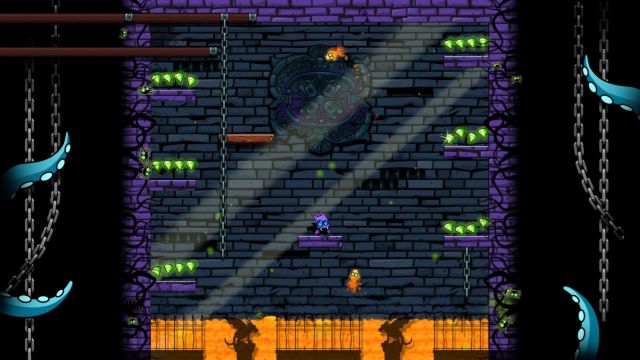 
Action Henk
A side-scrolling obstacle course game where you try to complete a course within a certain time limit. As with 10 Second Ninja, this one involves some gating (as in you can't access certain areas unless you've earned so many gold medals, etc.). I don't like gating, especially when it's utilized in fairly average games like this one.
Not going to bother.


ADR1FT
First-person adventure game in space. It's like a walking simulator, except you float a lot. I didn't get far in it.
I may return to it. What little I played was alright.


Advent Rising
It's some kind of a sci-fi game. I don't know because I didn't get too far into it. It seemed a little over-produced and wasn't quite what I was looking for at the time.
I'll play through it eventually.


Adventurer Manager
An RPG simulation game where you manage a party and a kingdom that serves as the RPG's setting. It's actually a pretty neat game. I didn't get through it because I was playing other stuff at the time, and this is something I'd like to devote my undivided attention to.
I'll play through it eventually.


The Adventures of Elena Temple
A very short platformer where you explore a bunch of interconnected rooms to collect coins and diamonds. It's kind of similar to Pitfall II: Lost Caverns. It's not a half-bad game, but it doesn't offer anything we haven't seen done more effectively elsewhere. It's also kind of neat because it's presented as a faux-museum. The game allows you to play using several different types of visuals styles, ranging from Commodore 64 to GBA. Each "port" of the game comes with its own bit of fictional history revolving around its creation.
Completed.


The Adventures of Shuggy
Review live
A puzzle platformer that's really addictive and tough. You play as a vampire trying to rid his mansion of unwanted guests so he can relax. This usually means running through a bunch of obstacle courses and collecting junk.
Completed.


Afterfall: Insanity
Review live
A cheesy, yet average post-apocalyptic survival-horror game. It starts off pretty standard, then devolves into a frustrating actioner near the end of its campaign. It eventually hits you with a twist that you could see coming since the beginning.
Completed.


Agarest: Generations of War
A tactical JRPG that I haven't delved into too deeply. What I've read and seen so far is promising, so I'll probably keep this one installed on my computer for a while, maybe even try to finish it.
Will complete as time permits.


Age of Wonders
Old school, turn-based strategy. Not my cup of tea. I couldn't keep my troops alive for anything, mostly because I suck at hardcore strat games.
Not bothering.


Agony
Review live
A first-person horror adventure where you travel through Hell. Prior to the unrated update, it sported a lot of bad stealth and confusing segments.
Completed. I'm not against playing the "Unrated" edition, but I'm not exactly tripping over myself to do so, either. I've read that it's slightly improved.


AI Rampage
A top-down stealth game where you obtain an item and try to sneak it back into a base without being detected by guards or robots. 99.99999999% of the time, you will be detected. It's pretty awful, really.
Not sure if I want to continue. Probably not...


Alan Wake
Third-person horror/shooter where you play a novelist trying to save his wife from an evil entity. Its filled less with classic horror concepts and more with the modern "weird fiction" type of horror, typical of writers like Bentley Little.
Completed


Alan Wake's American Nightmare
Review live
A semi-sequel where the titular hero battles through scenes from his own books. It's... okay. There's plenty of action and a fair bit of story, but its stages feel pretty limited.
Completed.


Albedo: Eyes from Outer Space
Review live
A sci-fi, first-person adventure game that plays out a bit like a B-movie. It's got some good puzzles, but suffers from ho-hum stage design and bugs.
Completed.


Albert & Otto: The Adventure Begins
A Limbo-like platformer with vague references to pre-WWII stuff and the rise of Nazis. Good puzzles, but glitchy as all hell. I actually couldn't finish the game because one glitch placed a necessary crate underneath a platform and in the water, where it couldn't be reached.
Gave up. I don't have time for buggy garbage like this.


Alicemare
An adventure title with light horror elements, made with RPG Maker. I've only played the first few minutes, but it's very intriguing. You start off in a school of sorts, and there seems to be some hint that you've been involved in some kind of trauma. You don't remember who you are or how to talk much (as indicated by interactions with NPCs), and everyone you speak to has something completely off the wall to say.
I'm going to keep playing this one. It's got me hooked.