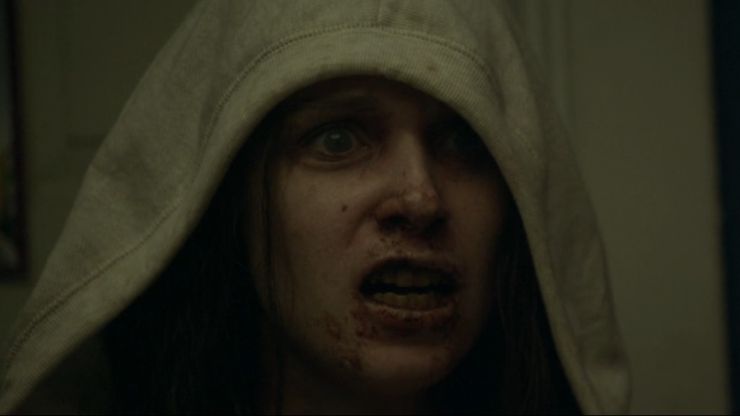 First up is Starry Eyes, a movie directed by Kevin Kolsch and Dennis Widmyer. This one stars Alexandra Essoe as a struggling, young actress (Sarah) trying to break into the film business. When she isn't auditioning or taking acting classes, she's either toiling at a Hooter's-like job with a creepy boss or secretly hating her "friends" while they all drink themselves into oblivion. Big surprise, her buddies are also movie industry hopefuls, most of whom lack the drive to even try. One of them did get a commercial gig once, and there's some implied tension between her and Sarah because of it.

While browsing casting calls online, Sarah stumbles upon one for a horror movie called "The Silver Scream." She auditions for the role, and fails despite her alleged chops. This leads to her having a self-harming meltdown in the bathroom, which one of the producer's assistants witnesses. She asks Sarah to come back for a second audition, where they ask Sarah to manufacture another tantrum. Obviously, things are about to get weirder from here...

***SPOILERS PAST THIS POINT***

This flick features a few beats seen in quite a few other horror movies. It seemingly borrows from the Canadian slasher Curtains, as it revolves around an actress willing to do anything for a chance to be a movie star--even that m-word.

No, not that m-word, you perv. Murder.

The last half of the film feels like a retread of 2013's Contracted. That movie was about a woman who bones a dude at a party, then contracts an STI that causes her to decay. The same thing happens to Sarah, eventually. The studio, called Astraeus Pictures, calls her back for another audition, which is really just Sarah giggling naked while they continuously flash a spotlight on her. That leads to a meeting with the producer, who wows her with seemingly pretentious chatter before sticking his hand under her skirt.

She resists him at first and tries to move on, but begins to realize that she wants so badly to be an actress that she might be willing to let some old dude have his way with her in exchange for living the dream. She returns to his office, pleasures him, and then begins to rot in a fashion similar to the protagonist of Contracted.

There's a temptation angle as well, kinda like Evilspeak, where the protagonist despises their peers and would love to give them the axe. Evilspeak's protagonist, Stanley Coopersmith (Clint Howard), finds an old grimoire and uses a computer to communicate with Satan. Coopersmith's military academy classmates bully him past the point of no return (not to mention that they kill his puppy, the bastards), and he decides it's time to get some revenge. He completes a black mass, acquires some dark powers and goes on a gory killing spree. Starry Eyes' closing act sees Sarah pretty much at death's door, literally falling apart and even vomiting maggots. She gets a phone call that tells her she can either die or be reborn. All they require is a little sacrifice. Extra emphasis on the s-word...

Sarah closes the show by killing the schmucks she secretly hates, including her roommate. She offs them all in bloody fashion before "dying." A masked cult comes for her, carries her up a hill and buries in her in a bizarre ritual. She later emerges from the dirt, completely bald and no longer showing signs of disease. After a few other adjustments, she becomes the beaming starlet she wanted to be, in exchange for her humanity.

Ultimately, a good horror film with a few flaws. It can be slow at times, but it's more character-driven than the average bear. It's not the first horror flick to shine a light on film industry corruption, and it won't be the last. However, this one nails that concept better than most of its ilk.

Final observations: The cult is obviously the movie studio. They chant "Hail Astraeus" during the end. Astraeus was the name of the Greek titan of dusk. His name translates to "starry."