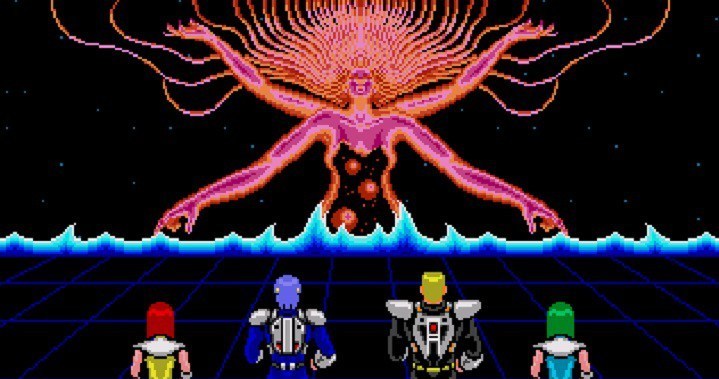 In my first two attempts at this game, I failed to get through the first dungeon, Shure. This time around, I've not only completed it, but also Nido, the Biosystems Lab, Roron, Uzo and Climatrol. The last two on that list were irritating as hell, with Uzo being nothing more than a time sink. I've also managed to recruit all of the characters up to this point, steal some good stuff with Shir (Flame Staff and Visiphone, especially), defeat a couple of bosses, complete the dams and land in the second planet, Dezo.

Right now, I'm grinding for cash so I can buy new equipment on Dezo before moving on to (I'm guessing) the Esper Manor or whatever.


Riviera: The Promised Land (PSP)
I'm digging this turn-based RPG so far, for the most part. I'm not a fan of the lack of free movement and the over-reliance on menus, but it's an otherwise decent game. Each dungeon or town you go to consists of interconnected areas, and movement is guided by menus. In dungeons, you gain points that allow you to interact with the environment, sometimes giving you new items or other little goodies. It's weird that you don't equip weapons, but use them from a list of items each turn. I guess that allows characters to share weaponry, which is kind of cool.


Blue Dragon (X360)
I'm currently in some ancient hospital or something like that, looking for a character that escaped me. I'm having a hard time focusing much on the story because it seems very random. The game as a whole is pretty boring, too, so...


Cuphead (PC)
I wanted to take a break from hard games after Sekiro.

...Then I installed this.

I completed the first level block, then defeated some Bon Bon boss (I don't remember her name) and another carnival-themed level with balloons and a giant hotdog mini-boss.

It's a pretty good run 'n gunner so far. I'm glad they separated the main bosses from the regular levels, because I couldn't imagine trying to power through both in a single life.


Infinifactory (PC)
This is a Portal-like puzzler where you solve puzzles in first-person perspective. For the most part, you drop different kinds of boxes down to achieve factory-oriented ends for an alien race who kidnapped you. It's okay so far. I've completed the first four puzzles.


The Dungeoning (PC)
I have this a try, and it's just not my thing. I'll keep playing it here and there, but I don't expect to make a project out of it. It's only sixteen levels long, so it (in theory) shouldn't take me long to get through it.

Hard pass. I might still try to go through it.