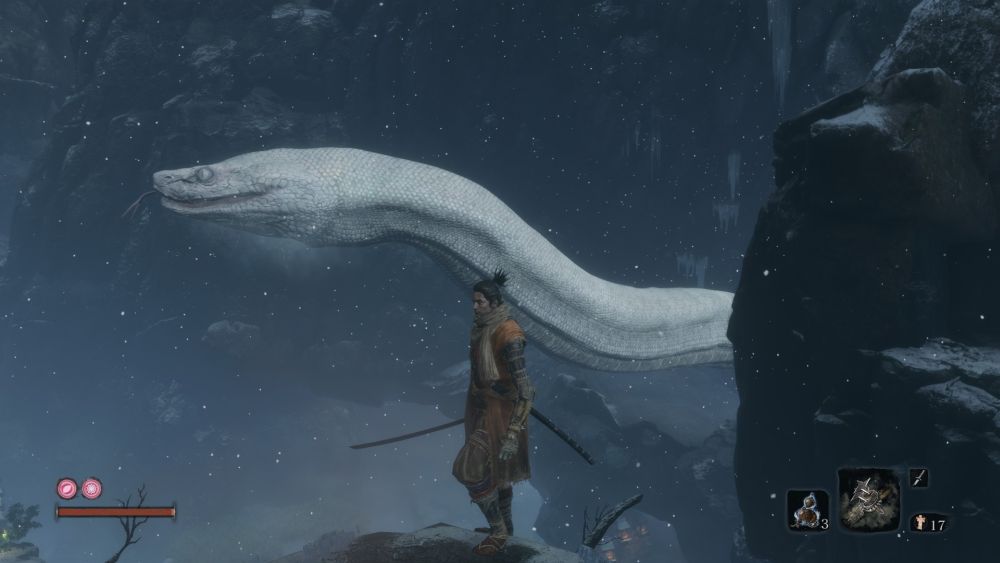 I don't have Steam Link directly connected to my internet, and use it to stream through my wifi instead. This means it streams the action on my computer onto my TV. While that cuts down on the wires involved, the trade off is that there's a small timing delay in streaming and the occasional dip in picture quality. I've played numerous games on Steam Link, and the timing has not been an issue. Even with Mechanic Escape, which relies a bit on timing, I wasn't affected. I also make sure to play games with any timing on both my computer and my Steam Link to see how noticeable the difference is, and I can't say that I've noticed it much.

Sekiro is a little like Dark Souls, sans major RPG elements. You play as an immortal shinobi sworn to protect his master, and do so through skill-oriented combat. Unlike other FromSoft games, blocking and dodging aren't effective defensive strategies. You receive no shields and dodging only works well in certain situations. Evading either puts you out of range to damage an opponent when you need to or doesn't protect you from certain sweeping attacks or combos, as it can leave you vulnerable. It's still necessary sometimes, though. For instance, one boss does leaping cleave you either need to side or back step, which he then follows up with either a lunge or a sweep. Those moves can leave him vulnerable if you respond correctly, and failing to dodge properly might mean a missed opportunity for you.

So basically, you need to parry just about every attack. Not only is it one of the best ways to mitigate damage (and you take quick a bit of that because you don't get any armor or ways to increase your defense permanently), but doing so damages your opponent's "posture." This is a fairly unique stat that each character has, including you, which basically prevents them from being hit with a deathblow. If you continuously parry most foes, you can break their posture and strike a blow that either kills them or strips off one bar of health. You don't even need to drop their HP significantly to kill them, though doing so also allows you to land a deathblow. There are other ways to break posture, of course, but parrying is the most commonly used in boss encounters.

In order to parry (deflect, as the game says), you need to be pretty spot on with your timing. An enemy attacks and you need to press the deflect button more or less right as it lands on you. It's not horribly stringent, and Sekiro's parrying system is head and shoulders better than most (Dust: An Elysian Tail still has the best parrying mechanic, IMO). However, if your timing is off, you could easily screw up and get crazy wrecked. In my experience, Steam Link's delay throws the timing off just enough that it's difficult to parry half of the strikes you receive. I had a hell of a time beating most bosses because of it, and thought maybe the game's parrying system was broken. In the back of my mind, though, I knew this wasn't the case. I knew that my the link was the root of my troubles, but I didn't want to play Sekiro on my computer. Damn me for wishing to play this game on my gorgeous, new telly.

Three bosses in particular gave me trouble: Genichiro, Lady Butterfly and Snake Eyes Shirafuji. After taking those three on, especially after repeatedly losing to the last one on the list, I decided to play a long session on my computer. And what do you know, I was able to parry most of their blows and actually defeat them. Where I spent an hour or two on Lady Butterfly without success, I managed to make short work of her on my computer. Shirafuji went from an unreasonable challenge to a jabroni. Genichiro was no longer my least favorite boss encounter, and now ranks among my favorites (Gyoubu, a spear-wielding dude on a horse, was still the most exhilarating battle for me--and I beat him on Steam Link no less).

So lesson learned: I'll be playing Sekiro on my computer from now on.