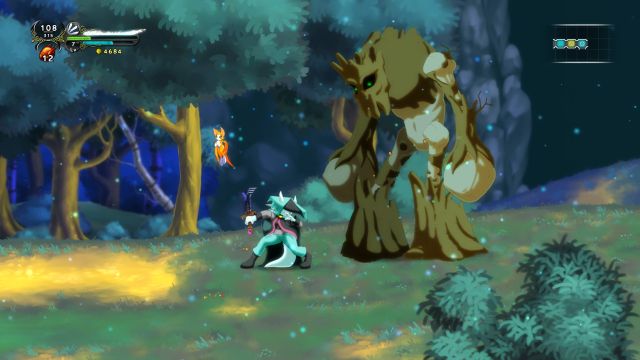 Knocking stuff out of the way, one game at a time...

It's such a good game, too. It's a shame another one hasn't come out yet. Review coming soon.


Endorlight (PC)
A delisted roguelite platformer on Steam. It's a very simple game, actually. Every level you drop to the bottom of the screen and look for a door, avoiding hazards along the way. It's more difficult than it sounds, but it's not very interesting or entertaining at all. I'll probably play this for a few hours. If I don't finish it after a while, I'll probably give it a review and move on.


Red Goddess: Inner World (PC)
Take two. I started over, getting irritated that my Xbox controller doesn't work for this one. Thankfully, I have a Steam controller, but I haven't configured it for this title yet. I made it pretty much to where I left off, and I'll probably get past it soon. While it's not off to a good start, I haven't seen anything that warranted the "negative" response it's gotten on Steam. Then again, I haven't gotten into combat yet, and I've heard that's its weakest point.


Iconoclasts (PC)
I've pushed through several rough spots. I went to the Ferrier Shockwoods and explored the hell out of that place, completing some really tough puzzles. I eventually made it to a tower owned by the Concern, and damn, that level was a mini-Metroidvania game in itself. It had a few cool boss encounters, too, including one where a swordsman tries to kill you while you're in an elevator and you have almost no wiggle room.

A subterranean level and a snowy mountain followed that, and eventually the worst boss I've seen in a long time. The game does a piss poor job of explaining what you need to do, but it involves hiding, switching between two characters and trying to hit an invisible opponent. You have to pay attention to his footfalls (which appear as rustling leaves) and attack when you see them, not to mention lure him with explosives. I also had to hide one of my characters because she sweats a lot--something that comes up in cutscenes often, as people always comment on her body odor. It didn't dawn on my that I had to hide her in a pond so he couldn't smell her.

As of now, I'm inside another One Concern base with something like 69% completion.


Chasm: The Rift (PC)
It's been ages since I played this game. I think I still have the CD somewhere, but it won't run on Windows 10. I had to resort to getting it off an abandonware site that already had it mounted via DOSBox. Honestly, if either Steam or GOG had this title, I'd gladly pay for it.

Sadly, as I feared, it hasn't aged well. The visuals are very grainy and the animation choppy as hell. One thing that is great about it, though: you can easily configure the key bindings so that you can play this game like a modern FPS with a keyboard and mouse, rather than struggling through the whole campaign using just the keyboard. I had to do that with Quake some time ago, and I hope to never do it again.