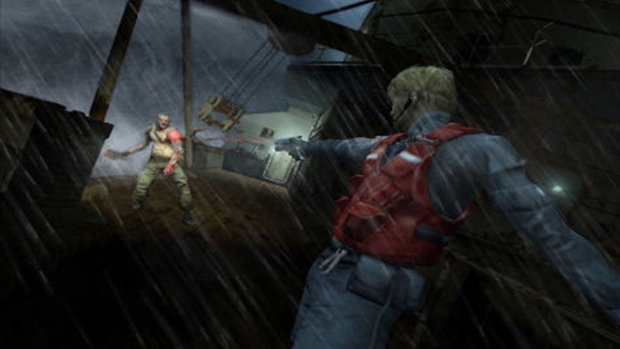 I dug out my Xbox copy of a crusty, old survival-horror game that I haven't completed yet. I bought this ages ago, and have procrastinated in regards to even touching it for years. This one takes place on an oil rig that's been invaded by parasites living in the oil--reminiscent of the made-for-TV '80s monster flick mentioned above.

Honestly, I'm not terribly impressed thus far. It handles fine, for the most part, but it's got some odd quirks. For one thing, it's raining on the platform, and Xbox doesn't handle the rain effects very well. As a result, outside sequences are blurry and dizzying, and advancing across the deck is irritating. On top of that, the game only saves at certain points, and it's very stingy about offering saves. I had to play for nearly an hour before it asked me if I wanted to save. Maybe they should've called this game Koudelka 2. You don't get any manual saves at notepads for typewriters, either, so you're totally at Cold Fear's mercy.

A twin-stick platformer with light RPG elements, this one is a bit tricky to handle. It does away with needless narrative segments, which is good, but its offerings thus far have been somewhat repetitive. I've only played this game via Steam Link with a corded controller thus far, and I've had some difficulty with controls. Mainly, the game inexplicably tries to run to the left when I'm sitting idle. I think this might be a byproduct of using those two accessories, so I'm going to experiment and see what triggers it.

Finally, we have another obstacle course platformer, similar to Super Meat Boy in some respects. However, this one isn't as hardcore, and it's level structure is slightly different. You mostly run through long hallways, trying not to make a misstep while collecting flying monitors. Occasionally, a giant robot will chase you, providing some extra difficulty to negotiating the traps before you. One hit and you're dead, no checkpoints. It's a decent title so far, but nothing new or mind-blowing.