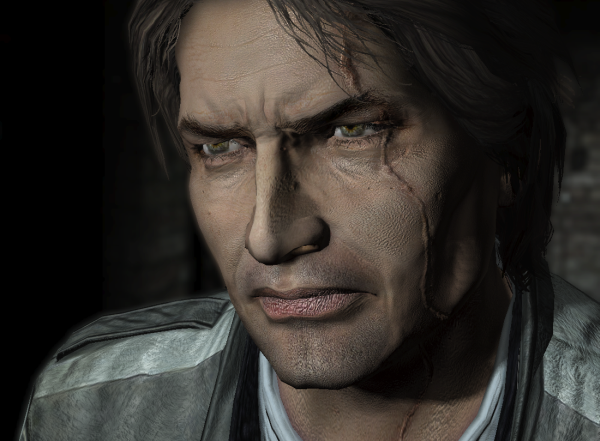 I delved further into the museum, which consisted of mostly standard survival horror fare. There was one annoying scene where I had to craft a sticky molotov cocktail and attach it to a crawling creature, then wait for it to slither back to its nest. If my timing was right, the cocktail would explode and burn the nest down, thereby granting me access to the next hallway. The crappy thing was my timing was rarely spot on and the bottle exploded before he got anywhere near the nest. When that happened, I had to pad down the corridor and back to the previous room, temporarily drop some stuff from my inventory and grab the necessary items lying around: a handkerchief, tape and a glass bottle of flammable liquid. I then I had to go into my inventory and tediously combine all three of those things once again, then retry.

There was also another boss battle, but fighting him was pretty much the same as fighting any boss in this game. I roamed around the room looking for explosives, lobbed them at him and shot them when they were close to him. Because Carnby's movements are kinda stiff, dodging everything was impossible. It was a pretty sloppy boss encounter, but it was at least doable.

From there, the game segued into a few puzzles and forgettable segments. There was a series of forklift puzzles and a segment where I had to run around a courtyard, trying to stay within a circular patch of light. If I fell out of the light, the cursed water from earlier in the campaign devoured me. I boarded a helicopter after that, only to survive a wreck. I dangled by a rope while flaming debris fell on me. I dodged with ease and pulled myself up into a ruined subway tunnel. There I fought the hardest battle of the game, against a seemingly endless supply of monsters. It took me a few tries to realize there was a store room in the back of a subway bathroom full of supplies and flammable goods. I burned a lot of my opponents to death with either a flaming chair, a broom or a baseball bat, plus I resorted to fire bullets a couple of times.

Finally, as the game wound down it pulled some nonsense that was an obvious attempt to pad out its length. Central Park became a mini-sandbox and I had to hotwire cars and drive all over the place looking for sinister tree roots called the Roots of Evil (har har har). Roots varied in terms of size, and based on their size they provided me with a number of spiritual points. Unfortunately, in order to undertake this process, I had to have at least one explosive on me. Every time I used one, I had to hunt for another. There were some lying around the park in certain areas, but the best way to find them was to loot blue sedans. Those always had an explosive in the glove box, plus items respawned within glove boxes I put so much distance between myself and the car. Still, it was annoying constantly having to hunt these down.

For the first hunt, I needed thirty points to be able to access a certain chamber in an old castle near Central Park. After that, I needed to kill more of these damn things to acquire around seventy-five points (!!!!) so I could lower a barrier. That was the only way I could kill a Cthulhu-like tree monster, because he had a force field around him. With each root killed, the shield shrunk. At seventy-four points, it was low enough for me to toss in a molotov and be done with the critter.

That led me to a series of decent puzzles and a handful of cutscenes, plus one more driving mission against a clock. Thankfully, this one wasn't as irksome as the previous two, despite having to use a shitty pickup truck that weaved everywhere. I made it to my destination in time and met the main antagonist, Crowley. There was no epic final boss. Instead, he held Sarah captive and I had to take the best opportunity to put a bullet in his head. It really wasn't hard. Sarah struggled early on in the encounter, making it easy to blow Crowley's brains out. From there, I moseyed to the final scene and made a difficult choice, then watched the end credits.

And so help me god, I just installed Alone in the Dark: Illumination.