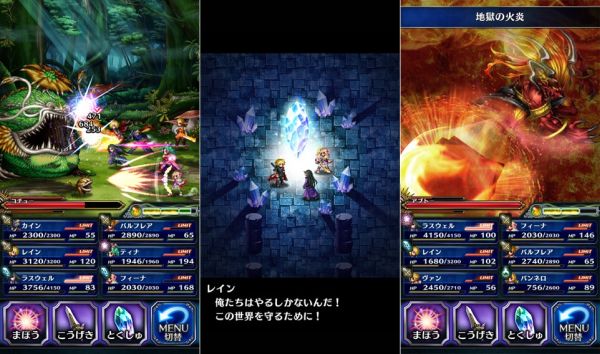 The last month has been killer. I've had little time to game, and even less time to write. My schedule consists of waking up, maybe cleaning the house, taking my kids to school or therapy, zipping to my mother-in-law's house to drop them off, driving to work, putting in my eight hours and either going home or heading to the gym. If there's any free time, I usually spend it power napping. Lately, I've learned how to game the daily routine such that I get a little more time, plus I've been taking my laptop to work so I can hammer out reviews and such that way.

As of yesterday, I Saturday a two week vacation. I hope to get some more gaming in and maybe cough up some reviews. We'll see, though. As for the gaming progress that I can recall:


Final Fantasy Origins (PlayStation via Vita)
Still playing the original Final Fantasy. I'm currently preparing to battle the vampire in the marsh cave, which means farming gil to pay for insanely overpriced spells. I recently ended up taking a break from this game so I could work on my reviews for Stranger of Sword City (which is live) and Final Fantasy Record Keeper. I should be getting back into it soon, though.


Final Fantasy Record Keeper (Android)
I've had it with this game. It's the same damn tiresome thing over and over again until your eyes bleed. Enter a dungeon, tap auto-battle, profit. Repeat the process until a boss arrives. Lightly interact with the game. Win. Build up mythril and buy new relics. Brace for disappointment. Sigh.

I don't remember what I did during my final sessions. I took part in the Five Dooms or whatever the event was called, which pitted you against Ultimate Weapon, Odin, Red Dragon, Atomos and Tiamat. After defeating the last one, I lost all interest in the game.


Final Fantasy Brave Exvius (Android)
This, on the other hand, has been more promising. Its combat system is roughly the same, but you're encouraged to interact rather than auto-battle your way through it. Also, the game offers many features that freemium RPGs neglect: side quests, explorable dungeons (unlocked after clearing an area's standard battles), an actual story and campaign, towns where you can converse with NPCs... I mean, it's pretty much like a regular, old school RPG, except that you have to unlock the explorable stuff and stamina is still a thing (it's called energy now, though). One neat thing: you can actually earn additional energy points rather than having to wait for them to refill, and the game doesn't cap your points if you earn more than your capacity. I'm currently sitting at something like 190/16 energy thanks to a package I bought. I have a feeling Brave Exvius will last longer than Record Keeper.

As with Record Keeper, you create a party by summoning characters from previous games, in addition to Exvius exclusive characters. With my first few draws, I managed to get three-star incarnations of Shantoto and Garnet, as well as four-star versions of Cyan and Penelo (the former of which is surprisingly powerful).

As for the campaign, I recently completed a cave segment that involved killing goblins. I also went back and scoured the exploration stage and snagged a lot of loot. After that, I returned to the town and created fire, sleep and blizzard spells to give to some of my troops. Currently, I'm supposed to head to a lighthouse where Siren dwells to investigate some sort of chaotic situation. The only other thing I have to report is getting Galuf (Final Fantasy V) using a summon ticket.


Alone in the Dark (1992; PC)
I've never played through this beloved classic, but I figured it was high time I did. In two sessions, I took on the challenges, used a walkthrough only when super necessary (which was rarely), and eventually finished the game. I have a rough draft written up for a review, but I've got special plans for that [mwahahahahaha].


Pokemon GO (Android)
My current Pokedex count is 107. I've reached a point where I rarely see anything worth catching. Never mind that the most recent update altered medals so that they give you passive catching bonuses... I see the same 'mon all the time, only occasionally spotting something worthy of capturing.

Sadly, I knew this was going to happen. Prior to my schedule change, I evolved boatloads of Pokemon, transforming Horsea into Seadra, Graveler into Golem, Magnemite into Magneton... Now I've hit a wall. After a lot of walking, I did manage to turn Doduo into Dodrio recently. I'm currently buddied up with Haunter, and I only need one more candy to evolve to Gengar. After that, I plan to pair up with Bulbasaur and earn the last five candies needed to get Ivysaur.


9.03m (PC)
Suskie's Year Walk review turned me onto this title. Mainly, I heard that it's only something like 10-15 minutes, and I thought that was a good length for a walking simulator. I have to say that yeah, it was nice playing something beautiful and minimally interactive that gets its humbling point across quickly and then leaves you the hell alone. The torpor that comes with titles like Dear Esther never had the time to settle.


Alpha Protocol (PC)
I started it and completed the preliminary mission. I'm currently doing some of the orientations. PS- I fucking despise hacking.

Movies:
Hush (2016)
A deaf woman living in the sticks fights off a sociopath armed with a crossbow.

The movie sports a simple premise, but maintains a tension pretty evenly throughout the film. It's a very entertaining, thrilling watch. I also like that the villain isn't some super tough monster of a man. He makes mistakes and realizes he isn't rock hard, but succeeds mostly by being opportunistic. It gives the movie a sense of realism that slashers and their cousins have been missing for eons.


Cub (2014)
Belgian scouts and their three den masters camp out in a forbidden part of the woods, where a wild child with a wooden mask stalks them. One of the kids has a troubled background, and thus strikes an alliance with the antagonist. Unfortunately, this leads to many deaths...

Meh. The movie's trailer, if I remember correctly, made this film out to be a wilderness survival flick similar to The Final Terror or The Mooring. I didn't get as much from it. It basically felt like a watered down Cabin in the Woods meets a less exciting Wrong Turn, but with a father-son combo instead of three deranged brothers. On top of that, there are no characters to root for. All of them are either uninteresting or despicable, and aren't worth caring about.