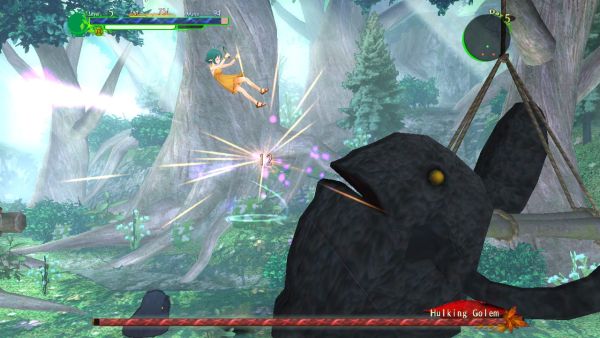 Instead of moseying on to the Shadow Palace, which is the next dungeon on the list, I decided to check the Valley of the Ruined, located in the slums. The Lineage Types there were all human and pretty tough. I took out the sharpshooter first, because he can damage you outside of battle from afar. With him out of the way, I took on both the black team's leader and a white ninja who likes to hide behind cronies. Both were kind of tough, but manageable. The white leader, a sorceress, was much easier, even though her danger rating was a point higher than anyone else in the valley.

Of course, I also took the time to farm useful equipment and bumped my party up enough that pretty much everything in the Shadow Palace was easy to scotch. That and I had two mages, both of whom are able to enchant our weaponry so we can actually damage the spiritual enemies in the palace. I killed one simple Lineage Type that's an anthropomorphic fly who respawns occasionally, plus a speedy lizard who dealt piddly damage, but could dodge almost any attack. Thankfully, he couldn't dodge lightning, and that was what killed him. Finally, after filling out what I could of the dungeon, I took on a yellow slime Lineage who could summon other slimes. That was a lengthy battle because it seemed like I would never get through the army of blobs and make any headway against the boss.

I didn't bother with the fourth and final Lineage in the palace for two reasons: 1) he's a five star danger level, which is way above anything I've ever faced, and 2) you need a specific item to get him to appear, which you can only get by ambushing in the palace. Once you've actually gotten that particular ambush to pop up, you need to kill the knights guarding the treasure, and one of them usually escapes with the chest, thereby preventing me from getting the item. I've decided to hold off on this venture until I've procured skills, spells or equipment that can aid me in dealing with this problem. Yeah, I have the divinity Dragon Fist 1, but it doesn't prevent the foe from eluding me. I'll try again after I level up Dragon Fist.

Lastly, I advanced the story, which involved everyone meeting at the aforementioned forest monument. The ensuing events led me to a fight against a wyvern boss who mopped up the floor with me. He killed, though not permanently, my leader and my tank, leaving an agile fighter, a cleric and two mages who were out of MP and resorting to consumable items to cast spells. Oh, and my cleric was out of MP too, so he was resorting to consumables as well. I decided to give a small holy vial a try during one desperate round where it seemed the wyvern would devour my remaining party members whole, and as luck would have it that was the killing blow. I narrowly won the battle.


Fairy Bloom Fresia (PC)
A cute brawler starring a fairy who wishes to protect her forest from invading humans and their army of golems (which look like brown slimes with arms in this game). There's loads of action and your typical RPG elements, including learnable skills and perks. However, the game is repetitive, and not in the way most brawlers are. Each level is an enclosed arena with maybe 2-5 platforms, wherein you punch and kick everything until they're dead. This goes on for four rounds (called days) until a boss appears on the fifth day. Suddenly, Freesia's difficulty spikes, forcing you to rely on a regeneration ability just to stay alive. Thankfully, the game is mercifully short at only 25 days (all of which I've completed), though there's supposed to be some replay value. The game may not be terrible, I don't see myself playing it again. Final rating: 3/5


Pokemon GO (Android)
I've run into that problem where I can't really get out of the house often and I've caught pretty much all of the regular Pokemon in my neighborhood. Occasionally, I'll get lucky and find something new or a specimen I already have but still need, but mostly I've run into a bunch of Pidgeys, Rattatas and Weedles. I did, however, spend some time at Manito Park, where I found a Cloyster, a ton of Staryus, a Pollywag and a Slowpoke.

If there's one complaint I have about the game, it's that Niantic should retool candy farming. You see, unlike other Pokemon games, in GO you need a certain number of specific candies to evolve a Pokemon. For instance, if you want to evolve Geodude to Graveler, you need 25 Geodude candies. You obtain these any time you catch a Pokemon, but you only get three candies per catch regardless of the creature's combat rating or evolutionary stage. In other words, whether you catch a Zubat or a Golbat, you're going to get three Zubat candies from the capture. You also get some from hatching Pokemon from eggs, but that tends to range from five candies per hatch to well over twenty. I managed to get five Pikachu candies from an egg I hatched not to long ago, but twenty-one Ponyta candies. It's pretty random and kind of irritating.

The worst is that some Pokemon require a lot of candy to evolve. Going from Graveler to Golem, Haunter to Gengar, Weepinbell to Victreebell.... all of those take 100 candies. Worse is going from Magikarp to Gyarados, which requires an astounding 400 candies. I have yet to even see a Magikarp, much less catch one. I joked with myself yesterday that I will probably catch all of the 100 candy evolutions before even amassing enough sweets. Right after thinking that, I caught a Vileplume, thereby making the fifty-some-odd Oddish candies I have pretty much useless unless I decide to level up my Vileplume (I probably won't). So far, it seems that my prediction might come true.