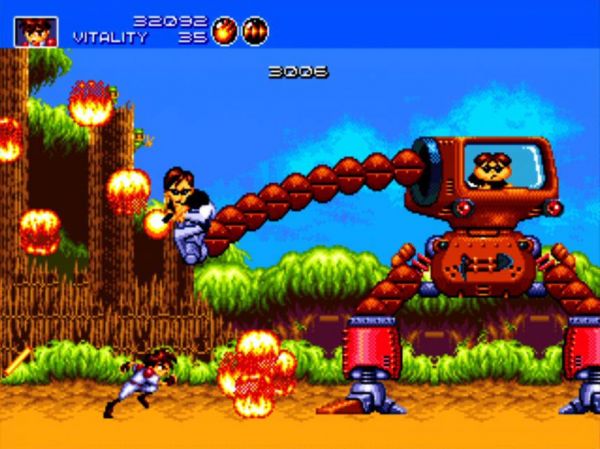 Rogue Legacy (PC)
I took out the last two dungeon bosses, Ponce de Leon and Herodotus, and marched my way to the final fight. It was a killer, let me tell you. The final boss (whose name I shall not mention, because it is kind of a spoiler) has two forms, the first of which is all over the place, hitting you with ranged attacks like crazy. I was eventually able to overcome that battle, but with precious little HP left. The second form is a much larger creature with more pattern-based attacks. He's a tad easier to deal with, but still pretty deadly. After a few tries, I decided to switch out some of my runes and add some Grace Runes to my equipment (these lower enemy levels, but also downgrade the rewards you receive from them). After softening him up with those puppies, I was able to take him out without much trouble and end the game. I've debated starting New Game +, but decided to move on instead. Maybe some other time...


Gunstar Heroes (Genesis/PC)
I have the game via Steam, using the Sega Genesis emulator Steam has. The nifty thing is that it has a suspend option, so you don't have to play games like this in one sitting. I've decided to select the first four stages in the order they're presented, and am currently on the second stage boss. I was able to get to his final form, but he was able to get a bunch of cheap shots in on me before I could kill him. It's a pretty frustrating fight.


Risen 2: Dark Waters (PC)
I am almost back to the point in the campaign at which I left off. I've landed at Sword Coast and took out the savages and pirates at the first tower. I'm about to gather Steelbeard and Patty to head to the nearby town before advancing the storyline. I was able to get through the first Tacarigua segment pretty quickly this time, and was even savvier with my cash. Because of that, I was able to nab a few more skills before leaving, and am pretty much a little more badass. Sadly, my character still looks like homeless Ashton Kutcher with an eye patch. Seriously, what is it with Piranha Bytes and not letting players customize the protagonists of their games?


In other news, I hope to resume writing reviews soon. I've been trying to piece together a review of The Park for RoG, plus touch up one for Dark Meadow: The Pact here.