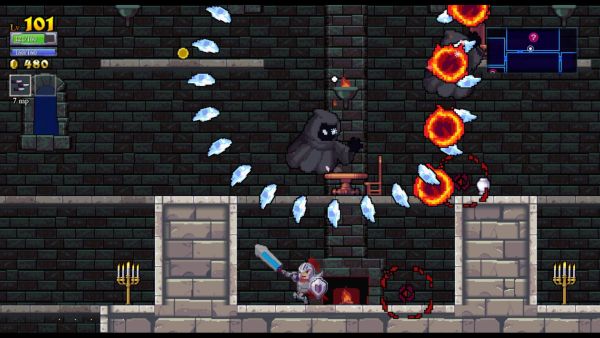 
Rogue Legacy (PC)
I've put about six hours into this game, and I've loved every second of it. For those who don't know, it's a blend of roguelike RPG and sidescrolling platformer. Permadeath is a thing, but when you die you select an heir to play. Heirs can spend the cash their predecessor earned to upgrade their ancestral home, which provides permanent stat increases, unlocks and upgrades classes, and creates vendor booths in front of the dungeon: a blacksmith, a woman who deals with magic runes that bestow bonuses unto your equipment, and an architect who can save the previous layout of the procedurally generated castle at the cost of lowering your cash intake by 40%.

Anyway, I'm a sucker for roguelikes and randomized dungeons, provided that there are plenty of surprises and things to loot. The objective, from what I can tell, is to kill four bosses in an effort to unlock a large door at the dungeon's entrance. Each boss dwells in a different themed territory: a standard castle, a forest, a tower, and a cavern. Thus far, I've offed two of the bosses: a humongous eye (name forgotten) and a massive spectral skull called Alexander. Currently, I'm scouring the forest to nab the last of the blacksmith blueprints, which allows the smith to build new weapons and armor. As far as I can tell, I still have two more swords, a helmet, a breastplate, and three capes to find in the forest. After that, I'll head to the tower.


Star Ocean: The Second Story (PS)
I haven't pumped as much progress into this as I would have liked, but I have at least advanced the story and gotten past the preliminary talkie bits. Right now, I'm in the Kingdom of Cross and I have yet to advance the story there. IIRC, I'm farming cash so I can pay for new skills.


The Park (PC)
Regardless of EmP's warning, I decided to check this one out. I don't typically judge games by price point, but I will say that it is a huge waste of money. Thankfully, my copy was free. $13 for a game that scarcely lasts an hour (I pushed my playthrough out as much as possible, and I still only ended up with 75 minutes). I love when works of horror get a little crazy/surreal like this one does near its conclusion, but I also like it when the crazy bits lead up to something substantial and not overly ambiguous. The movie Jacob's Ladder is an excellent example of insanity leading to a terrific revelation and finale. I'm not going to talk too much about this game, as I am writing a review for Realm of Gaming and my thoughts on it will be fully on display there. Basically, it felt like Silent Hill, Five Nights at Freddy's, and the Australian flick The Babadook in a blender.


Bloodborne (PS4)
Killed Father Gascoigne and advanced to the next area. There, I've chopped up a goodish portion of the population that's greeted me before being shot at by some loon on a rooftop. Currently, I'm hiding behind a statue while he's shooting. That's when I ran out of time, oddly enough.