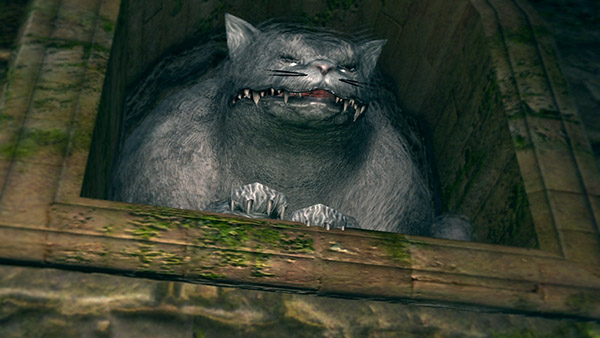 The life of a games critic is a cold one. Now and then we have to depart from those we love to spend time with those we utterly cannot stand. I recently put Dark Souls on the shelf so I could tarnish every memory I have of Godzilla by playing one of the worst games attached to the franchise play Godzilla on PS4. I mean, seriously. It makes the Game Boy Godzilla look like a masterpiece. In only a couple of sessions, it went from mediocre to complete garbage. I will say, though, that the Commodore 64 Big G game is worse, but that's not saying much...

Before my temporary sign off, I hammered out a bit more progress. Previously, I was upgrading my junk and getting ready to face the boss of Anor Londo, but then I decided to take detour instead...

Earlier in the game I rescued a knight named Lautrec, not realizing what he would do. The man made his way to the Firelink Shrine, as rescued NPCs are wont to do, and hung out near my the shrine's firekeeper--the person who tends the bonfire. Some time after ringing the second bell, I returned to the shrine to find the bonfire extinguished and the keeper dead. I was able to pick up some loot from her remains, where it became clear that Lautrec had killed her. I should have known, as the guy appeared to be sketchy in the first place.

Among the effects you receive from the firekeeper's remains is an orb that, when used in the correct location, allows you to "invade" Lautrec's domain as a phantom and kill him. Of course, he isn't alone and has both a tank and a mage-type hanging out with him. I attempted to beat Lautrec, but only met misery. I had the guy's HP down to a single blow and was in the position to finish him off when one of the mage's blasts interrupted my strike, killing me. Never again did I get so close. At least, not until later...

After a bit of studying, I discovered that there exists a couple of rings that allow you to stealth very easily. I already had one (some dragon ring that makes you silent), but there was also a Ring of Fog you can get from engaging in PVP matches in a certain area of the Darkroot Garden.

...the very area where I got my ass handed to me repeatedly. Well, I figured, "I'm way stronger now than I was then, so I should be able to prosper." And prosper I did. In fact, I used the vicinity as a grinding area. When I felt sufficiently strong enough, I entered a building and spoke a cat named Alvina, thereby changing my covenant to Forest Hunters. I also discovered that joining the covenant grants you access to a merchant in the depths of Blighttown who has some pretty neat (read: strength-based) weaponry. I paid him a visit and dumped some dollars down on a Demon's Great Machete, which I upgraded to +10. With this puppy, I'm able to one-shot the massive guards in Anor Londo, given the right circumstance. Of course, it didn't help me much in PVP...

I don't care much about online gaming, and will only take part in competitive events if I need to. I do like playing cooperative titles (Jason and I went through Final Exam once, plus played a bit of Forced, which I didn't much care for), but I rarely have the opportunity. When it comes to PVP, I usually suck, know that I can do better, and just don't give a rip because that requires practice, which requires time, which is something I don't have in abundance.

So yeah, someone sent me a message telling me that I have a nasty habit of attacking in some sort of way that makes it easy to parry my blows. I appreciated the pointer, but didn't respond to the message because I was too busy loving my new Ring of Fog, which I received from killing several people despite my suckiness. Heh, one of those "kills" was actually a draw. We wore each other way down, then both went for a desperation blow, both of which landed. We died simultaneously. It was pretty awesome.

After receiving my ring, I proceeded onward through the Darkroot Garden, killed the one-time wolf creatures, then entered the boss fight against Sif the Great Gray Wolf or whatever he's called. Sif's weakness is characters with heavy weaponry and a shield. I carried the aforementioned great machete and a Black Greatshield.

After that little bit of business, I decided to pay the hydra in the Darkroot Basin a little revenge visit. It took a few tries, but I found that he was pushover at close range. I could easily block his blows, he barely reduced my stamina when I did so, and it only took a shot or two to lop off a head. I only died twice, if memory serves. Once was because his long range attack proved to be too much, and the other was thanks to the drop off in the water before the hydra, which spelled instant death.

After that I padded back to Anor Londo, entered Lautrec's domain, two-handed the machete, and backstabbed him. His HP diminished to a single chunk, which I hewed off with one final blow. I then turned to his comrades, aiming to kill them before the domain disappeared. I managed to end the mage, but only did a bit of damage to the tank. Bottom line, though: I got what I wanted from Lautrec, and he's currently burning in hell. Score one for Destroyers everywhere.

I eventually returned to the Firelink Shrine, restored the firekeeper instead of using her soul to upgrade my flask, and decided to try my hand at the Catacombs. I found that I was one-shotting the skeletons this time around, so I figured I'd have an easier time. Entering the stage itself, I discovered a bunch of unkillable skeletons. Of course. I pressed onward, hoping to find a way to destroy them, and happened upon a necromancer of sorts. After killing him (and thankfully, they don't respawn), the skellies fell just like anything else. I worked my way through the catacombs, pretty much destroying everything that moved, discovered the hidden bonfire, and advanced to the boss, Pinwheel.

Oh, how unfortunate... Named after an early '80s children's program/wanna-be Sesame Street. I'll admit it: I was humming this tune from my childhood while slicing this guy up. Pinwheel didn't put up much of a fight. As the battle began, I landed two cleaves and watched his HP drop by nearly half. The only thing he had going for him is that he was one of those bosses who had a couple of dummy versions of himself floating around, so I had a tiny bit of difficulty finding the real Pinwheel. After a couple of tries, though, I did find him and gave him the throttling of his undeath.

I pushed onward into the Tomb of the Giants, where I died. Next time I play, I may try to recover my lost souls and then challenge the Anor Londo boss.