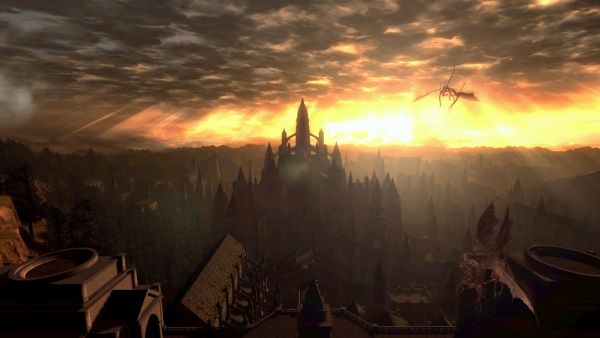 It's been a while since I blogged about games I'm playing (i.e. mostly Dark Souls). Before jumping into the one game I've mainly been work on the last month or so, I thought I'd mention some games I've been playing for review purposes.

Odallus: The Dark Call (PC)- I'm almost done with the game. I have one more stage to go, with four secrets in it, before challenging the final level. Thus far, I've received all of the power ups and upgrades and only have a couple more to find. My verdict: it's a great game and a worthy faux-retro follow-up to Oniken.

The Adventures of Rocky and Bullwinkle and Friends (NES)- Such an abysmal platformer... I somehow made it to episode three, I think, which is incredibly cheap. I'm having a problem getting past the second segment because you have to use health to executes special maneuvers to deal with a bunch of gun-toting cowboys.

After the last blog, I was stuck for a bit. I had no idea where else to go, so I decided to advance the story and attempt to ring the second bell. I didn't want to venture through Blighttown, which is where the second bell is located, but I forced myself to anyway (it also helped that I grabbed some upgrades along the way). One thing I hated about Blighttown was the presence of snipers that put "toxic" status on you. I figured out that they don't respawn once killed, so I made it a point to wiping all of them out before advancing. Once that task was complete, I scoured the bottom of the stage for a bonfire and thankfully found one. From there, I looted the place and battened down the hatches to get ready for a boss battle...

I met with lava-exuding Quelaag some time later, and man did she whoop my tail at first. It took me a bit to figure out her pattern, but I eventually learned that she's vulnerable when she stops to regurgitate. Although that didn't prevent me from suffering damage, I made avoiding her attacks into an art form. In my final attempt, I scarcely lost much HP, and she went down pretty easily. I collected her soul, which I intended to transform into the Quelaag's Furysword, and made my way to the bell.

With the second bell rung, I raced to meet with the primordial serpent at the Firelink Shrine... 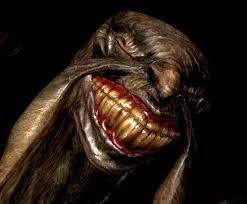 The very creepy primordial serpent, that is...

Once again, I was left with nowhere to go but the obvious road that opened up. I took some time to gather more goodies and level up before venturing into the newly opened Sen's Fortress, even managing to open the sealed sector of the Darkroot Garden and bump off a few dark knights throughout the game.

Entering Sen's Fortress sucked. I stepped on a pressure plate and received three darts to the chest for my carelessness, then had to face off against two anthropomorphic snakes who dusted me off as if I were a goomba. Despite my best efforts and a little more leveling, I just couldn't get an advantage on these guys. With a little bit of Googling, I discovered that they drop a strength-based greatsword with terrific scaling.

Hey, my character's a strength build and I dig greatswords!

After using a few humanities and "humanizing" myself, I got one of them to drop a Man-Serpent Greatsword almost immediately. With some effort, I upgraded my newly found beast to +5 and shuffled my way through Sen's Fortress, where I died constantly thanks to traps. If it wasn't bladed pendulums knocking me off of tight walkways, it was boulders crushing me. Regardless of my efforts, I couldn't find a bonfire and thus had to begin the stage anew every time I died. It eventually got so that I knew the ins and outs of the dungeon and was able to traverse it without much difficulty, until I reached the summit.

There a golem rains explosive cannonballs down on you while you attempt to puzzle out where to go next. Because I put so much effort into getting here, I didn't want to croak without finding a bonfire. I Googled the location of one and found it to be in the most unexpected area: off a ledge that looked like a fatal fall. I plummeted, landed on a small outcropping platform, and lit it. Success! From there, I turned my attention to looting the area, nabbing a one of a kind rapier in the process, before moving onto the boss, the Iron Golem.

My first attempt was a disaster. Cannonballs still pelted the boss encounter locale and I couldn't focus on the boss without taking a hefty amount of damage. I happened to know where the projectiles were coming from and decided to pay that place a visit. There I found a smaller golem, as I mentioned earlier, who was the source of my frustration. Unfortunately, there's no way to shove a cannonballs/boulder/whatever the hell they are up his ass to teach him a lesson, so I just cleaved him to death. Thankfully, he's also a non-respawning enemy.

The Iron Golem still gave me some trouble, only because he kept knocking me off of the limited area on which we fought, killing me. Otherwise, he wasn't a terribly hard boss. You can get in close to him to avoid most of his attacks and just slice away at his groin whilst wielding your sword in two hands. Needless to say, I was knocking off fair chunks of his HP, so it didn't take long to fell him once I finally managed to not fall off the tower. From there, it was on to Anor Londo! At last!

My arrival was bumpy, to say the least. I fought a bunch of the huge guards, each of which giving me 1500 souls a pop, and upgraded accordingly. That helped me to topple both of the mini-boss gargoyles, lopping off the tail of one of them for a special weapon, and explore until I hit a wall. Eventually I came upon a place populated by huge demons that ended with a couple of powerful silver knights sitting on ledges, armed with bows that fire massive metal arrows. Thankfully, I managed to grab the Black Iron Armor set in my travels and beefed up my strength, endurance, and newly found equipment so that I might better survive the situation. Still nothing doing. The worst of it was that I desired to use the Black Iron Greatshield, but couldn't because it exceeded my carry limit.

My choices were to either continually beef up my endurance or seek out an item that allowed me to carry more. There was one such item, held by a mini-boss who constantly creamed me: Havel the Rock in the Undead Burg. Since I was more powerful at that point than I'd ever been (equipped with a Man-Serpent Sword +10, no less), I decided to pay Havel a visit. Within a couple of tries, I figured out his pattern and eventually brought the big man down and secured my special ring. With that, I returned to the archers (Black Iron Greatshield in hand), managed to survive their missile onslaught, aggroed one that blocked my path and simply ran away. The idiot charged at me, full steam, stepped off the ledge and fell to his demise. Not long after killing him, I reached a bonfire. Booyah.

Inside the main fortress, I cut up a bunch of knights, found the Dragonslayer Greatbow, and made my way to the one character I hoped to find in all of this madness: the giant blacksmith. His stocks include twinkling titanite, which I'm currently farming in order to fully upgrade my armor set, and his abilities allowed me to turn a falchion +10 into Quelaag's Furysword. Granted, it's not my most powerful weapon, but its fire-based damage will come handy against certain enemies.

I opened the shortcut and made my way back to the Firelink Shrine rather than take on the Anor Londo boss. I decided it was time to pay the Undead Asylum a return visit. With a little effort, I made my way back to Snuggly's nest and returned to the asylum, kicked the ever-loving crap out of the Stray Demon boss, found the strange doll, and did some trading with Snuggly (which resulted in four twinkling titanites). Currently, I'm back in Anor Londo farming souls so I can purchase enough twinklings to power up my armor, then I'm heading into the boss battle.