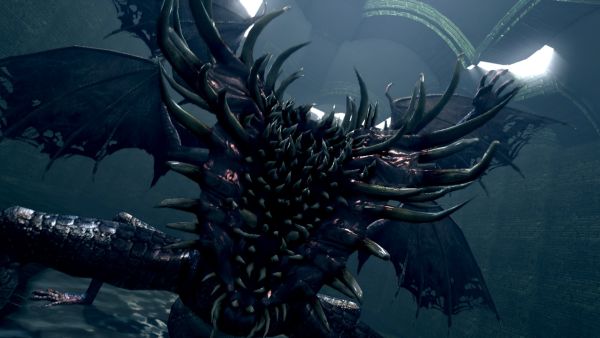 I don't have much to report here because I mostly spent my time grinding so I could afford an improved sword. Long/short: I engaged in enough crab killing, pearl farming, and house raiding to afford a better saber. Now I think I shall be doing a tad more exploring.

Most of my progress consists of exploring, dying, nabbing a few items that I'm glad to have (elite knight armor set, for instance), but mostly of some dead bosses.

First to perish was the Capra Demon. I attempted to fight this brute and was initially slain because I haven't done much to boost my defense. Sure, I could try to dodge and block and be all snazzy, but the quarters in which you fight the creature are very tight and the camera angles, as a result, suck. So I spent a decent chunk of time upping my vitality and endurance while farming Titanite shards to reinforce my armor set and shield. That having been accomplished, I engaged the Capra Demon one more time and won via attrition, with a tiny bit of blocking and healing on the side.

The second to fall was the Moonlight Butterfly, which I found a fair ways into the Darkroot Garden. This was an easy battle, though I lost on my first attempt because I was short on arrows and sucky at dodging her projectile attacks at first. I also took the time to venture into the Darkroot Basin to grab and upgrade the Longbow. With the bow as strong as I could get it, 100 large arrows in my quiver, and the Drake Sword ready for the inevitable moments where she would bring herself close to the platform on which I stood, she didn't stand a chance. A handful of shots and a few slices and that was all she wrote.

Lastly was a battle against the Gaping Dragon, seen above. At first he stuck his rather cute little head over a crevice and didn't look like much. Then he pulled his entire body out of the fissure and revealed himself to be a Lovecraftian horror that almost didn't resemble a dragon. Honestly, though, I was amazed at how easy this boss was. Granted, one wrong step and he could have easily crushed me (as he did in my first attempt), but once you have his pattern down you can easily obtain a flawless victory over him. Unfortunately, I didn't think to cleave off his tail, so I missed a weapon there. Just the same, I brought him down and can now enter Blighttown from the Depths.

I tried that only to find that Blighttown is pretty damn challenging. What makes it so difficult is the presence of snipers who fire toxic darts. The crappy news is they inflict you with the status ailment "toxic," which is basically poison on steroids. It's not difficult to get the items needed to remedy the ailment, as they only run 1000 souls from the female undead merchant near the entrance to the Depths, so at least it isn't hard to deal with. The awesome news, though, is that the snipers are specialty enemies and thus don't respawn when they've been offed.

Currently, I'm attempting to get to Quelaag's Domain and defeat her so I can bring myself one step closer to having Quelaag's Furysword. First I'm going to have to find a bonfire in Blighttown, though. I've died several times without finding one, mostly thanks to either losing my footing or suffering from toxic. I recently found a map of Blighttown online, so that should help a bit.