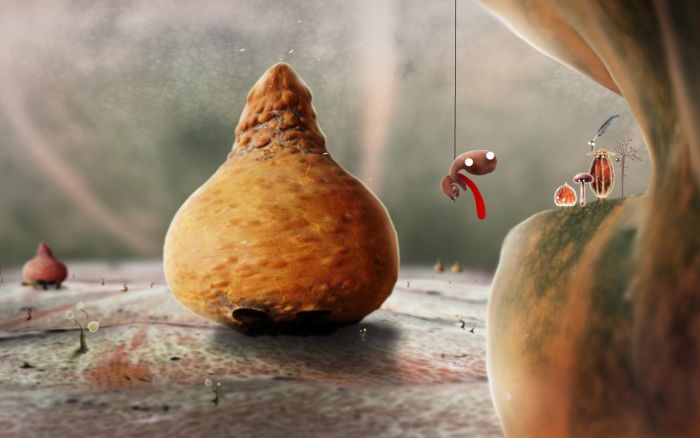 Albedo: Eyes from Outer Space (PC)
Imagine a hybrid graphic adventure-survival horror game with a bit of Corman camp and a wonky combat system. That's pretty much Albedo. It's a point and click title where you roam around a space station that has been attacked by tentacled eye monsters. Puzzles ensue.

So far, the game seems to be divided into rooms, with each room housing a puzzle that must be solved before you can advance. Right now I'm in the fourth of these chambers, the boiler room, and all I've done is kill an eye and drink a beer.

Thus far, I'm teetering between impressed and underwhelmed. The atmosphere and the B-movie feel are terrific, and the puzzles are actually pretty decent. The combat, as I indicated earlier, isn't all that great and feels tacked on. Hopefully this won't be an issue in the coming "rooms."

Botanicula (PC)
I finished this game. I realize that I haven't really written in-depth about it here, but there really isn't much to write. Imagine opening the YouTube app on your phone and putting a string of Monty Python animated segments on repeat, then dropping some acid, sticking your head in a tree whilst still watching the MP vid, and having someone speak to you in tongues. It's an odd point and click game, one that I don't mind so much, mainly because it's weird, but not one that I'd call "great." I'm not big on how the first half or so of the game can pretty much be solved via trial and error, but thankfully the second half features some decent logic puzzles.

Wasteland Angel (PC)
I'm not fond of this game, and I'm done playing it.

No, I haven't beaten it. I suppose I could, but I don't really see a point. It's unimaginative, repetitive, and a tad glitchy. What inspired me to give up was the fourth boss. Defeating a boss is a simple matter. All you have to do is load up on sub-weapons (landmines, napalm), which are traps that you can lay on the ground, and place them in the boss's driving path. Easy, right? The only hitch is that foes suck at pathfinding, and that goes for bosses. The fourth boss stage has a building in the middle of the map that the boss loves to gravitate to. Of course, he always gets stuck because he attempts to drive through the obstruction, but can't. Because of that, you often can't defeat the fourth boss because he's incapable of driving over your traps.

I did eventually kill the guy and moseyed on to the fifth area. After completing a stage that was exactly like every other stage before it, I decided it was time to call it a day. I exited the game and came back later to reload my file. For the second time, the game decided that autosaving my file was not a priority and I was back at the fourth boss again.

Nope. I'm not having any of that garbage. Fuck you, Wasteland Angel. You're not even as good as Zombie Driver anyway, and that's saying something.

Final Fantasy: The 4 Heroes of Light (DS)
I don't know if this is really much of progress. I recruited a mouse and turned Brandt into a dog after completing a dungeon. I guess I'm supposed to go see a queen or something and do another dungeon. I really want to play this game more often, but it hasn't been in the cards of late.