WELCOME BACK TO DARIUS 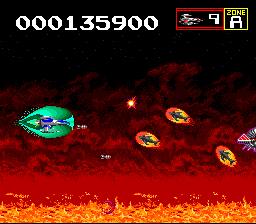 These are the inhospitable inhabitants of Darius, a forsaken planet that must once again be saved from marauding mechanical fish. The birds who once soared through clear blue skies have flown into the sunset, their cheerful songs replaced by the inorganic warblings of robotic sea turtles, coelacanths, and moray eels. Inspired by Daiku Maryu Gaiking and accompanied by the melodies of Zuntata, the Darius series has (almost) always combined solid action with fanciful settings.

When NEC licensed Darius II from Taito, they handed the musical reins to T's Music, the group who brought us the intense Lords of Thunder and Sapphire soundtracks. T's worked their magic once again, producing arrangements of Zuntata's melodies that are both vibrant and powerful. Armed with rich high-color visuals and striking music, NEC dubbed the result Super Darius II.

Even if the game had turned out rotten, NEC probably would have still called it that. "Super" games were selling pretty well back in the early 90s. Unlike some of its dubious peers, this one clubbed me over the head with its crazy-cool presentation more than a few times.


A HUGE BATTLE SHIP CODE NO D700 "REVENGE SHARK" IS APPROACHED FAST
Deep within the sea of stars, the silence is broken by the rusty creak of an underwater, iron gate -- leading into an appropriately menacing melody. From its murky grotto emerges REVENGE SHARK, a screen-filling warship equipped with spotlights, rotating turrets, fighter escorts, and mobile suits. While the heroic pilots Tiat Young (she's hot) and Proco Jr (he's not) decimate the cruiser piece by piece, an appealing mix of electric guitar and xylophone punctuates the moment. 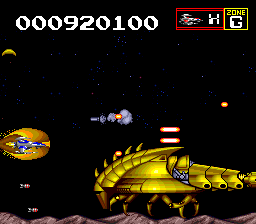 During another memorable scene, Proco Jr soars above the rocky surface of the moon. A jazzy piece -- replete with trumpets and piano -- kicks in, and CRAB ARMER struts onscreen, its many legs dancing to the rhythm. As the gargantuan golden horseshoe crab moonwalks to the upbeat tempo, it lashes its armored tail, sending forth barrages of speedy missiles.

These boss encounters may lack the challenging "I rule for slaughtering that guy" bullet patterns of Darius Gaiden, but they're far from brainless. And they look cool. As a Starblazers fan, I particularly appreciate the hermit crab that wears the WWII battleship "Yamato" on its back. These creatures are set atop impressive backgrounds: swirling flames, fossil-laden caverns, and cities smoldering amidst raging infernos. Each stage also features a fierce mid-level "captain", each recognizable to Darius fans.

With few exceptions (the flaming dolphins come to mind), smaller foes are far less imaginative. Although unimposing in appearance, the standard enemies actually put up a reasonable fight. Cannons fire from below while scatter-shot missiles approach from the right and kamikaze drones flank from the left. Taken together -- and most of the time the enemy forces will fight together -- it's a reasonably challenging game of weave and shoot.

Similar to other Darius episodes, weapons and shields can be powered up many times over -- moreso than many other 16-bit shooters. Unfortunately, each of the 28 levels only provide a few upgrades, and they're lost at death (unless playing on EASY mode). The power-ups are so sparse that, to reach max power, you'll have to perfectly follow your chosen path through the selectable stages. This feels somewhat oppressive; in a game that relies so heavily on style, it would be nice to more consistently wield stylish weapons.

Between the swank bosses and bold music, Super Darius II nevertheless appeals to my inner graphics whore. It's pretty, it's energetic, and it's tough enough to require some effort. The laughably tragic (if you've beaten a Darius game before, you know what I mean) endings are even in English. I'd actually take NEC's version over any other home port of Darius II. It's the sexiest of them all!

If you enjoyed this Super Darius II review, you're encouraged to discuss it with the author and with other members of the site's community. If you don't already have an HonestGamers account, you can sign up for one in a snap. Thank you for reading!

© 1998-2020 HonestGamers
None of the material contained within this site may be reproduced in any conceivable fashion without permission from the author(s) of said material. This site is not sponsored or endorsed by Nintendo, Sega, Sony, Microsoft, or any other such party. Super Darius II is a registered trademark of its copyright holder. This site makes no claim to Super Darius II, its characters, screenshots, artwork, music, or any intellectual property contained within. Opinions expressed on this site do not necessarily represent the opinion of site staff or sponsors. Staff and freelance reviews are typically written based on time spent with a retail review copy or review key for the game that is provided by its publisher.