Fun Fact: Ever since composer Koji Hayama played the drums for classmates at a school festival, his dream was to "be famous". Cho Aniki's serendipitous success made his dream come true. When the Japanese speak of culturally significant videogames, they speak of Dragon Quest, Final Fantasy, and Cho Aniki. Lest you disbelieve my honest words, know these truths: the soundtrack CD sold like gangbusters, and Cho Aniki's iconic imagery became a phenomenon that influenced such diverse works as Berserk, Sex Demon Queen, and God Hand.

It must be gratifying to achieve fame at an early age, performing live concerts while bronze musclemen oiled up more than Michael Nakazawa prance across the stage and the crowd chants "ANIKI! ANIKI!"


In the opening cinematic, playable characters Idaten and Benten free the muscle brothers from their prison of injustice. With both brother-options flying by your side, the cruel galactic bodybuilding champion "Bill" won't stand a chance.

Fun Fact: Idaten and Benten are Buddhist deities. That's why they are immune to the vacuum of space. Adon and Samson aren't deities, but they have really hard muscles. This is later referenced in Der Langrisser FX's secret "hard" mode.

The Cho Aniki series -- known in some circles as Super Big Brother -- has a reputation for flagrant homosexuality. The thing that might surprise you about the original episode is that, while undauntedly crazy and full of super brotherhood, it's not particularly gay. If you're itching to battle obese titans clad in metal diapers (with penis-men living inside the diaper), then you'll need to search out the sequels. Cho Aniki instead gives us heavenly centaurs, an Elvis submarine, and a giant fire-spitting orb boss, which is kind of like Legion's sun boss, except that this one is actually fun to fight.

Mechanically, Cho Aniki is a straightforward checkpoint shooter with a limited power-up system, but this game was never about the thoroughly competent mechanics. It's about short spurts of "oh look this is a level" that are frequently interrupted by outrageous but challenging boss encounters. For proof, consider the below battle against a hot warrior woman:

WARNING: By moving your mouse over the below image, you certify that you are 18 years of age or older and not offended by sexual content 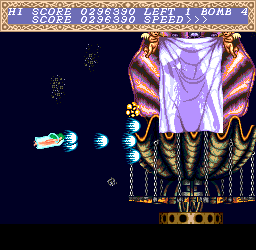 Welcome to Radiant Brothergun! The entertaining PS2 sequel may be slicker, but it doesn't match the original's crazed intensity. Wild encounters are frequent, imaginative, and challenging. That's probably why so many of them were recycled for the recent (and excellent) Cho Aniki Zero. Toshiaki Fujino, you can put your bandanna into your Trizeal and blog about the bulls in Spain, but true "Shooting Love" is about putting that energy into the action.

Five years ago, I'd have lamented such a cool game's expense and obscurity . . . but now you can download it on the Wii virtual console for cheap, you lucky bastard! So don't take my word for it; give the game a go. If you find you like it, then be sure to pick up the PC Engine original. That's what any self-respecting hardcore gamer would do.

One Final Fun Fact: Adon and Samson were inspired by Fist of the North Star's burly brothers Raiga and Fuga, who shouted "ANIKIIIII!!!!" with dramatic passion when their older, but absurdly wimpy, brother was stabbed. God bless NCS/Masaya for immortalizing that tender moment.

If you enjoyed this Cho Aniki review, you're encouraged to discuss it with the author and with other members of the site's community. If you don't already have an HonestGamers account, you can sign up for one in a snap. Thank you for reading!

© 1998-2020 HonestGamers
None of the material contained within this site may be reproduced in any conceivable fashion without permission from the author(s) of said material. This site is not sponsored or endorsed by Nintendo, Sega, Sony, Microsoft, or any other such party. Cho Aniki is a registered trademark of its copyright holder. This site makes no claim to Cho Aniki, its characters, screenshots, artwork, music, or any intellectual property contained within. Opinions expressed on this site do not necessarily represent the opinion of site staff or sponsors. Staff and freelance reviews are typically written based on time spent with a retail review copy or review key for the game that is provided by its publisher.